DEATH TRIPPIN IN THE VIRAL ZONE:
THE YEAR OF DELTA & OMICRON. 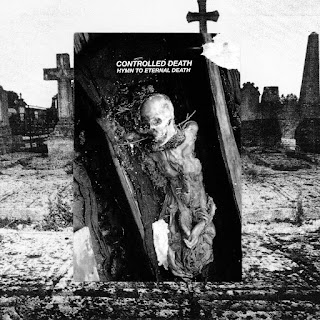 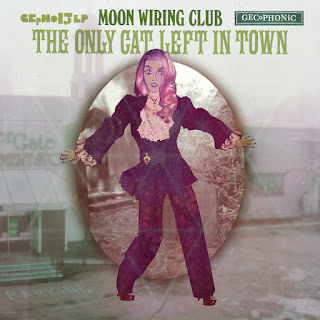 After those above outstanding recordings there were several others I enjoyed such as Ghost Party Delirium from Moon Wiring Club, Carnage performed by Nick Cave & Warren Ellis, God's Waiting Room plus the Superdank cassette by Lo Five, Toi Toi Toi's Vaganten, The Hall Of Counterfeits by Steve Kilbey & The Winged Heels plus Nick Edwards, the artist formally known as Ekoplekz, had at least five nifty releases Landfill Electronikz volumes 1 & 2, Beyond The Corner & Not For The Trees plus the Aethertalk EP under the alias Szlazak as mentioned above. 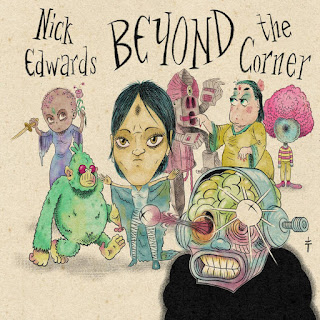 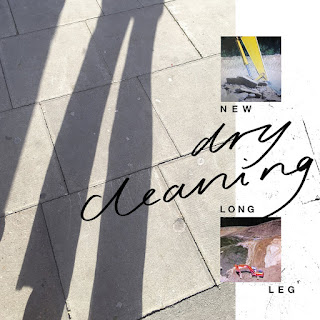 MOST FRUSTRATING ALBUM OF 2021
New Long Leg - Dry Cleaning
Florence Shaw is obviously a fucking charismatic superstar...
...along the lines of Mr Baron Mordant of eMMplekz (in)fame...
...it's all about snatches of lyrical dialogue germinating in Shaw's mind that then seemingly accidentally spill out of her brain into the real world. It feels voyeuristic to be hearing these private utterances being involuntarily murmured out loud, like being miked up to someone talking to themselves on public transport or in front of a mirror in a pub toilet...
...each sporadic thought is a puzzling miniature oral treatise that can be illuminating, confounding, absurd, embarrassing or more often than not inane...
...but I can't help thinking she’s in the wrong band. The backing band play the overdone, over-revived retro post-punk to 90s post-hardcore pastiche of influences game ie. Wire, Gang Of Four, Magazine, The Wipers, SY, Polvo, Unwound ad nauseam. All me absolute favourites but c’mon!
It’s kinda incongruous. If they had to be post-punk her vocal delivery would be more suited to a post-punk sound with more spaciousness for her delicious words to shine like PIL, New Age Steppers, Fatal Microbes, Young Marble Giants, Homosexuals, Annie Anxiety,  The Slits, ESG et al....
......maybe I'm the one being short-sighted, perhaps I just need to be emphasising Florence's vocals and lyrical content innovations above everything else like we did with say The Sex Pistols and X-Ray Spex. While those bands rocked with white knuckled punk abandon it was the vocalists delivery & subject matter that were startling and new at the time of arrival...
...We spend an LP peaking inside Shaw's interrupted/non-linear thought processes, rummaging through the clutter of her mind, experiencing the brain fades and the overloaded mental sensation of always being connected yet so disconnected in this wifi/i-phone/zoom age. She delivers deadpan random phrases that encapsulate the drab euphoria of the endless nothing that is 2020s pandemic lockdown life...
...then I go back to thinking really though she might be better off in an entirely different less tired genre...
...Like Bjork being way too good for The Sugarcubes, will she realise her band are holding her back and go solo next year...
...still New Long Leg is pretty hard not to like because Shaw is so awesome at capturing all the blunted paranoid indignation, petty annoyances, tiny pleasures, slight disappointments, mild desperation, loneliness and the despondent elation in the listlessness of this particular moment, sometimes all within one phrase. Plus by the time of the final track Every Day Carry the band and Florence Shaw have struck cohesive in the red noisy gold so you are ready to forgive any misgivings.
^^^^^^^^^^^^^^^^^^^^^^^^^^^^^^^^^ 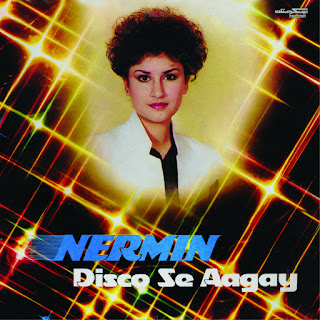 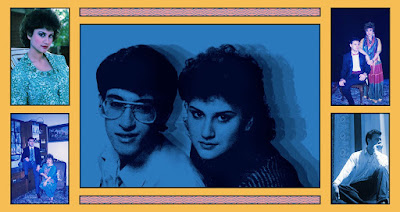 Nermin Niazi and Feisal Mosleh's delightful 1984 LP Disco Se Aagay is one of the best records I've heard ever so this is my highlight of the year old or new LP wise hands down!. New wave Hindustani synth pop disco by a teenage British-Pakistani brother and sister duo. Like if Human League were fronted by a 14 year old Pakistani girl from Birmingham with incredibly sophisticated Asian disco-pop melodies and heritage. So thanks to The Discotan label from Los Angeles for rediscovering and reissuing this gem! 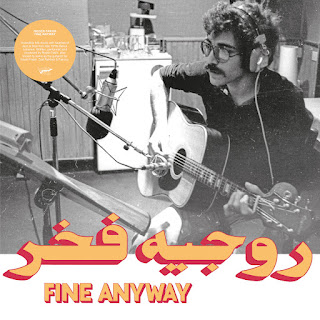 An infectiously audacious folky singer-songwriter with tinges of acoustic pop, jazz, soul, country-psych etc. in the vein of a mid 70s Californian troubadour except this was recorded in 1977 in a Beirut basement (the bonus tracks in Paris during 1978) by the legendary enigmatic Lebanese musician Roger Fakhr. It’s sung in English so there’s barely a hint that it comes from a Lebanese artist. Fakhr has collaborated with other legendary Lebanese musicians such as Fairuz, Issam Hajali & Ziad Rahbani.
It’s got glorious hooks galore. Some tunes are melancholy while others are jauntily upbeat. The instrumentation is pretty spare: mainly acoustic guitar & reverbed vocals with the occasional backing vocal harmony, tambourine, flute, piano & hand drums.
On a couple of the bonus tunes from the Paris recording he even gets positively funky & electric with the guitar, bass, psych FX, keyboards, wah-wah & even the use of a drum kit!
Suffice to say the entire LP is melodically exquisite with beautiful accompanying arrangements.
It’s absurd to think that most of this great record was only ever released during the 70s in a very small quantity of hand copied cassettes with a rudimentary but quaint texta designed cover.
So we have to thank the wonderful Habibi Funk Records for their persistence in getting this album out into the world in 2021 as Fakhr originally declined a reissue several years earlier.
Habibi Funk had a couple of other notable releases ie. Habibi Funk 017: Chant Amazigh from Majid Soula plus Habibi Funk 015: An Eclectic Selection From The Arab World Part II a compilation from Various Artists. 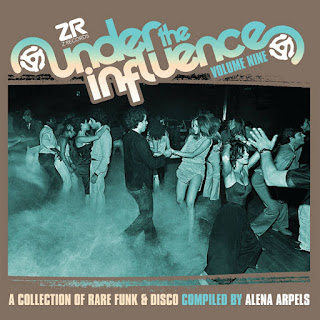 Z Records have done it again with their 9th instalment of the Under The Influence series. Alena Arpels has done a stellar job of compiling little known obscure gems that were apparently "originally pressed on vinyl in very small quantities between 1970 & 1983. Many of the tracks included in this compilation were never commercially released but given away by the artists to family and friends instead." So we get a whole lotta funk, boogie, funky soul, disco, jazz-funk etc. It's partay time folks!
Great labels such as 180G, Cultures Of Soul, Terrestrial Funk & We Want Sounds continued in 2021 to take care of our disco, funk, soul, jazz-funk, boogie and funky gospel needs. Praise the Lord! 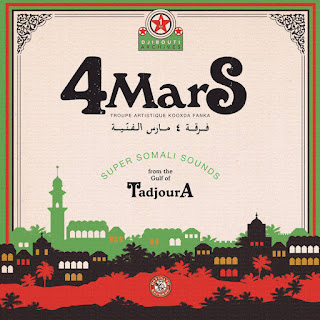 Ostinato Recorords killed it again this year with the unheard, to western ears at least, compilation of tunes from 4MarS. How the fuck do you describe the music of 4MarS??? Well it's big and it's got the lot: Maximum African reggae (Not really like Jamaican Reggae at all) with African choral singing, Middle Eastern psych synths, brass sections, Egyptian rhythms and funky Asian flavoured flutes which all meld together for this snazzy soulful masterpiece of East African music from the Gulf of Tadjoura.
Analog Africa released one of their greatest African compilations in 2021. This time it was the untamed funky sounds from 70s Central Africa, Cameroon Garage Funk. This contained raw free funk that just has to be heard to be believed. This is right up there with 2008's African Scream Contest. Although I shouldn't be shouting out to them at all after bad business practices during the pandemic ie. not refunding damaged goods due to unreasonable return time limits when basically trade had come to a halt in Australia. So up yours Analog Africa! 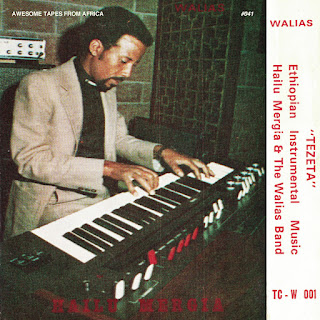 Hailu Mergia & the Walias Band had another ye olde stone cold classic cassette reissued in 2021. Tezeta (1976) on the Awesome Tapes From Africa label is more choice Ethio-Jazz that any Ethiopian music aficionado needs to wrap their ears around. 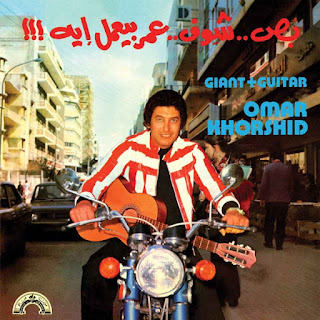 The Egyptian guitar pioneer Omar Khorshid originally released this LP in 1974, while living in Beirut, on the Voice Of Lebanon record label.
He had been in Egyptian guitar groops, pop singer backing bands & orchestras but wanted to fully explore the potential of his electric guitar & other electronics. His roots were still firmly Arabic just with added psych-funk, fuzz & synth. A deliciously brilliant style developed & is on display here!
This year the fabulous We Want Sounds label from France reissued it on vinyl. 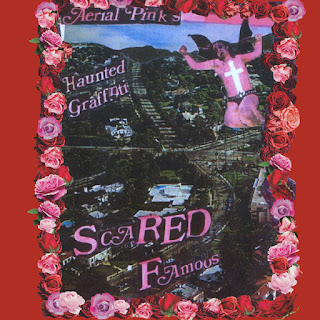 A good indication of how fucked Western Society is right now is that Ariel Pink got cancelled in 2021. The US political system is a corrupt duopoly so whichever side wins it's a losing situation. However according to the far left ideologues running everything in America (& the rest of the West) almost 50% of Americans are deplorable human beings with totally unacceptable political viewpoints that need be silenced. So Ariel Pink despite being of Mexican and Jewish heritage was labelled a white-supremacist for voting republican thus he was promptly sacked by his record company Mexican Summer. Here in Australia some fans I know fell for this absurd rhetoric too and quickly denounced Ariel. Funnily enough Mexican Summer were only too willing to take my money for this reissue though. Anyway it's a double vinyl compilation of his 2001 Masterpieces FF>> and Sacred Famous. Great music from one this millennium's musical visionaries. 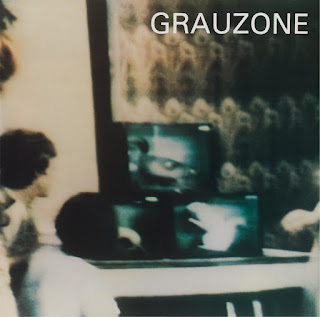 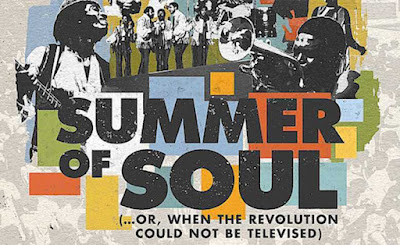 SUMMER OF SOUL
At the start just as you're getting into a tune by Stevie Wonder or Chambers Brothers the film-makers cheapen the astounding music by interrupting it with interviews and social context etc. Put the interviews in-between the tunes! It's not that hard and it wont frustrate the shit out of the viewers. Hopefully there'll be a blu-ray box set of just the raw concert music footage. I have no problem with the historical content, the triumphant musical tales, civil rights battle stories, gritty realism newsreels etc. but I just wanted the concert, not snippets of greatness. I mean this is some of the best music of the 20th Century... anyway... it's still a hell of a television event. The threads, the swagger, The funky psychedelic soul, Mongo Fucking Santamaría, Ray Barretto, Abbey Lincoln, Max Roach, Sonny Sharrock, Hugh Makesela, Nina Simone and Sly & The Fucking Family Stone.
C'mon Disney (Well it was on Disney here in Australia) what about 8 hours of this stuff uninterrupted! It is way more innovative and exciting than George Harrison having a little tantrum about god knows what?! 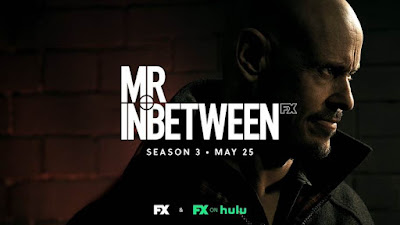 MR INBETWEEN
The final season was fantastic and heartbreaking. 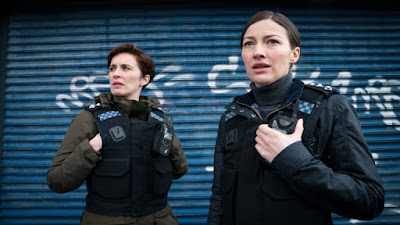 LINE OF DUTY
Kelly Macdonald kills it as DCI Joanne Davidson. The legendary trio Ted, Kate & Steve at Anti-Corruption Unit 12, catch bent coppers once again. I still loved it in its sixth season, but is that it? 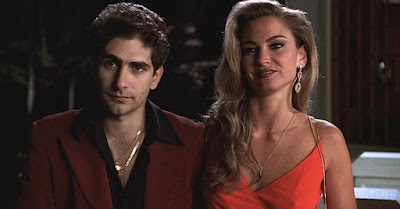 THE SOPRANOS
Still the best televisual drama in history. It's the best 86 hour movie ever made innit? It now has added resonance in these illiberal times. 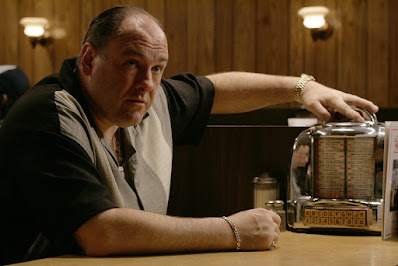 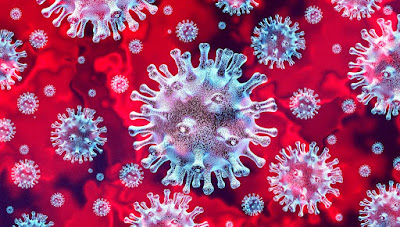 THE WORLD
*Not quite understanding why everyone's telling me how to live and what to think in the current political climate. I'm fine thanks I have a brain.
**Not digging the rise of authoritarianism coming from all political angles here in Australia and the seeming acquiescence to it.
***Understanding even less: The people who have weaponised compassion but are then calling their fellow human beings idiots, scum and vermin!
BRAVE NEW NINETEEN EIGHTY FOUR CONTINUES....
Posted by Tim 'Space Debris' at 01:07

No one is born in the wrong body