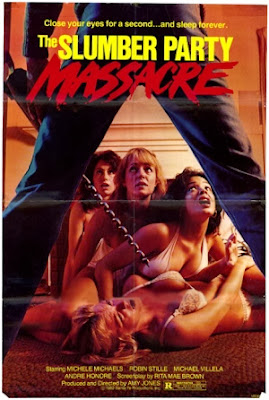 I was brought up a strict Catholic and it wasn't until late 1987 that we got a VCR.  So I basically missed the whole VHS horror thing. 1982s  Slumber Party Massacre is a classic of the slasher genre and along with the teenage kicks you get a feminist message.  Amy Jones was one of the few female T & A slasher directors and she makes the most of it. Way before Scream et al. she made a mockery of the entire genre.  Chicks win in the end and guys come off second best. This movie would have been great if you were a girl in the 80s havin a sleep over. I think it was Bitch Blog who led me to this film. The soundtrack is awesome too. Since watching the film and trying to track down the score I've become aware that this is a much admired item, you know, going for ridiculous amounts of doe on e-bay. Indeed Ralph Jones' soundtrack is up there with the best of the post-Carpenter school like Jay Chataway's Maniac or Tim Krog's The Boogey Man. Minimal and restrained eerie synth soundz for the psychopathic 80s. 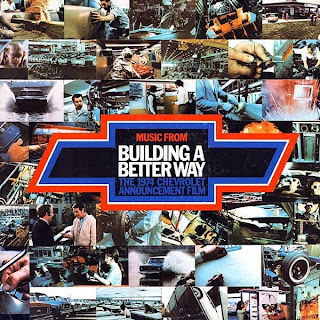 This is a 1974 LP from Chevrolet.  Listen here if you dare!
Thanks to Maiorov Simpleton's library blog.
Posted by Tim 'Space Debris' at 21:16 No comments: 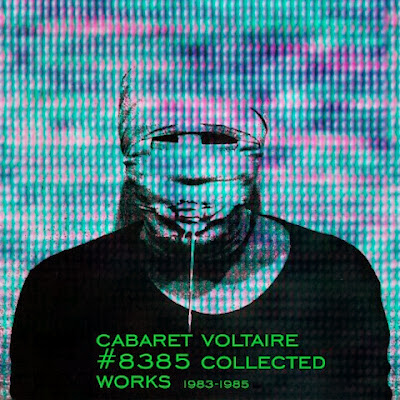 Never ventured into Cabaret Voltaire's work beyond 1982.  From their inception in the early 70s to1982 they were one of the greatest bands on the planet. Cabaret Voltaire's paranoid clanky custom built low-fi electronic dub funk was an irresistible sound. It reflected, according to Richard H Kirk "Post-war desolation, unemployment and ugly urban landscapes."  I guess their move into more commercial/dancefloor friendly terrain after the departure of Chris Watson during the 2*45 sessions in 1982 always seemed a bit dubious to me.  New Order were already occupying that area with excellent results soon to be followed by Severed Heads. Previously Cabs could do no wrong on their winning streak of releases from 78-82 including classics like Mix Up, Three Mantras, Voice Of America, Red Mecca and their clutch of singles now compiled on The Original Sound Of Sheffield 1978/82. Cabs were also one of perhaps only 2 bands, the other being Devo, that arguably recorded their best work before they started releasing records.  Their pre-history recordings were only ever released to the wider public over 20 years later on Methodology 74/78: The Attic Tapes. That 3 cd set was the sound of a real homemade electronic garage band.

In 1983 with the release of The Crackdown they were reduced to the duo of Richard H Kirk and Steve Mallinder. Along with their change of direction came major labels, money and fancy 24 track studios. The music I'd previously heard from this era, mainly from late night tv, has always underwhelmed me so i'm venturing trepidaciously. When I first put on The Crackdown (disc 1 of 6 in this collection) I thought maybe this was a bad idea and that perhaps there was no need for me to pursue this avenue of exploration. I quickly moved on to disc 2 which contains the Micro-phonies LP and much to my surprise I am comin back to this record for more. Sure that doesn't mean its up there with The Attic Tapes but for anything to get a repeated listen, in this day and age, it must be doing something right. I have to look at them as The Cabs mk II, which they are, to get past the fact that no electronic squalls of dubbed out noise will be coming my way. Do Right, Spies In The Wires and Sensoria are the choice cuts here. The only other disc I've got to so far is disc 5 which has the 83-85 12" versions and is perhaps the best way to listen to this era of Cabaret Voltaire. Just Fascination and Crackdown (both originally from disc 1) are excellent here as is the aforementioned Sensoria.  These versions are beefed up for the disco dance floor and dare I say it make you wanna boogie, in a very white manner of course. This is as far as I've come so far but I'm a lot more positive about continuing on with the other 3 cds and then there's the dvds.....to be continued.....

*I missed that Wire article a while back, so apologies if you're bored of this subject.
Posted by Tim 'Space Debris' at 13:59 No comments:

Only A Shadow-Cleaners From Venus

Email ThisBlogThis!Share to TwitterShare to FacebookShare to Pinterest
Labels: Cleaners From Venus, Midnight Cleaners, On Any Normal Monday, Only A Shadow


Turns out that Chevrolet released at least 9 records including LPs, 7"s, even a 10", according to Discogs. These were for use in the dealer's showroom apparently. 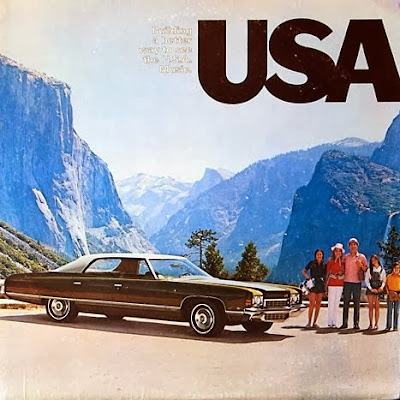 Haven't heard the record but I'm loving this cover from 1972. Building A Better Way To Seeing The USA Music by Richard Behrke released by Chevrolet! Looking forward to listening to it here or maybe not.
Posted by Tim 'Space Debris' at 00:19 No comments: 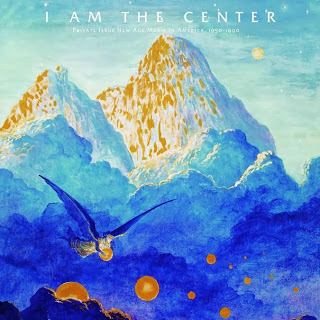 I Am The Center: Private Issue New Age In America 1950-1990 -
Various Artists
Totally diggin these mellow vibes man. Some of my/your favourite new age/ambient heroes are here like Laraaji, Iasos, Don Slepain, Constance Demby, Michael Stearns & Larkin. Then there's a whole bunch of fellow astral travellers I've not heard of like Judith Trip, Daniel Emmanuel... The best discovery for me here is Aeoliah who gives us 11 and a half minutes of cosmic ear candy, waves of plinky keyboards give way to moon desert guitar bliss to free your mind on the track Tien Fu: Heaven's Gate. That Constance Demby track is killer and indicates her influence on the neo-cosmic underground er.. hello Motion Sickness Of Time Travel. Actually this compilation probably would never have come out if its artists weren't such a big influence on the whole hypnagogic/vapourwave scene of the last few years. This once reviled genre (new age) continues its much warranted rehabilitation.  Fans of the excellent but now inactive blog Crystal Vibrations rejoice, your album of the year has arrived. 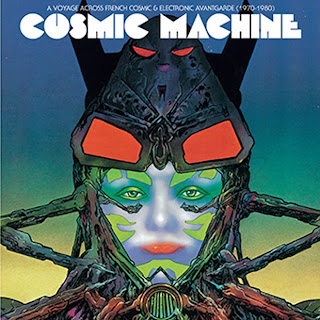 When I read that an LP was coming out with that title I got very excited. I thought 'Yeah about time the French got their due in respect this kind of gear.'  I guess I was expecting to hear from the likes of Heldon, Spacecrft, Fondation, Patrick Vian, Illitch, Thierry Muller, Metal Urbain, Puzzle etc and maybe a bit of French library by Jean Pierre Decerf or Bernard Fevre. Anyway Fevre appears but none of the rest do. France's 3 most famous musical exports appear however ie. Serge Gainsbourg, Jean-Michel Jarre & Jean-Jaques Perry. I possibly would have used the word pop in the title like 'A Voyage Across French Electronic Pop.' but hey that's not gonna fit for the market they're aiming for though is it? Semantics aside this is a good survey of 70s electronic pop French stylee much of which I'm unaware of. 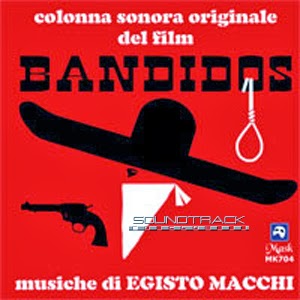 The Living Dead At The Manchester Morgue OST-Giuliano Sorgini
This tedious film had like 15 different names and it was set up north in the UK but it was Spanish! Sorgini is Italian and I'd previously heard his Under Pompelmo LP which was some funky shit from 1973 and also went under a different name, London Transport! That's all very confusing isn't it? This soundtrack however is one of the best Italian horror soundtracks ever. Its up there with Goblin's Suspiria and Profundo Rosso, Riz Ortilani's Cannibal Holocaust, Morricone's Argento trilogy, Libra's Schock, Nico Findenco's Zombie Holocaust er... and the list goes on. This soundtrack from 1974 has all the right spooky psych-funk vibes with strings, electronics and awesome drumming. The atmospheres are creepy with haunted organs and witchy woodwinds.  Sinister laughing and screams permeate the soundtrack and I loves it.
Posted by Tim 'Space Debris' at 18:04 No comments: 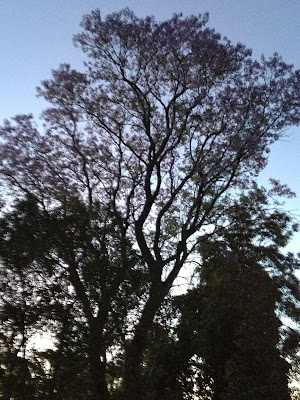 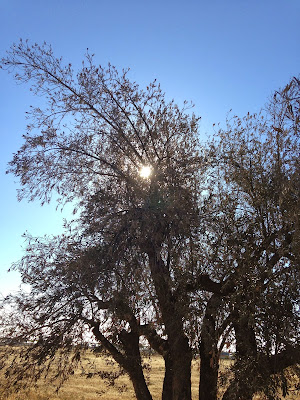 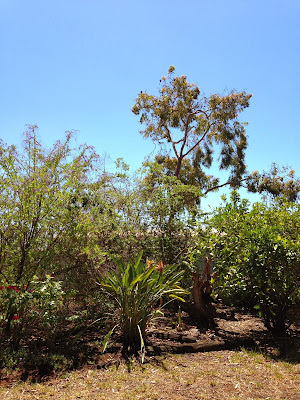 These 4 photos (i-phone-no fx) come from the Sunraysia district in November 2013.
Two are from me backyard!

This is one of the funniest things I've ever seen. I can barely watch this, it hurts!
Posted by Tim 'Space Debris' at 23:57 No comments:

I just watched the second season of Girls and hey that was weird wasn't it? Way less laughs in this season. It had me thinkin of Woody Allen doing Interiors after his early comic hits ie. Girls season 2 was really quite bleak and disturbing. Then in maybe the second to last episode my continuity/disbelief suspension was totally ruptured. Great Australian actor Ben Mendelsohn shows up as Jessa's dad! My viewing then switches from identifying with the kids/20 somethings to then having to readjust to relating to Mendelsohn's character's situation as he's only a couple of years older than me. Funnily enough it was not that dissimilar to mine as in he'd moved to the country and was watering the grass, something I'd never done until 2 days ago. I guess I relate to the characters in Girls in a retroactive kind of way. I watch them and see what they're up to and mainly think 'Thank god I'm not that age anymore'. I still relate to their more universal human characteristics though. Just like when I watch The Simpsons I still relate to Bart on a lot of levels but I'm also surprised how Homer-like I can be. Is this navel gazing? Anyway seeing Ben Mendelsohn put me in mind of a time in the early 90s when late at night after boozing on there he was in the same St Kilda kebab shop as me. I remember thinking 'He's from one of my all time fave movies (The Year My Voice Broke) and here he is just as drunk and in need of late night lamb sandwich as me'. Noah Taylor from that same movie turns up in Game Of Thrones but that wasn't nearly anywhere near as jarring as Menda being in Girls makin me feel well old. I guess also Taylor's appearance doesn't jar because Game Of Thrones is fantasy while Girls almost feels like Cinema Verite. Oh shit I'm in trouble now with the pretentious police for saying C..... V.....  Judy Collins, yes the singer from the 60s, makes an appearance too, looking quite frightening. Lena Dunham, Girls creator, has created some exceptional characters including Hannah played by herself. One wonders/worries how autobiographical Hannah actually is with her escalating OCD and Hypochondria. In Girls the boys are especially brilliantly acted. Ray, Charlie and Adam are confusing, complex, frightening, stupid and real. Then there's the ladies, Jessa is fabulous, Shosh is just weird and how much do you hate Hannah's mum and bloody Marnie? It's one of the few telly shows right now worth watching. 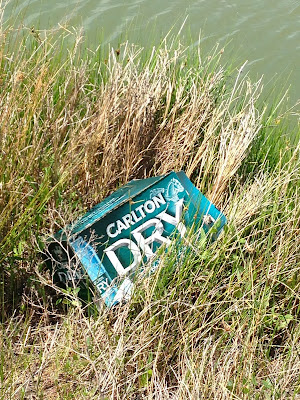