One of Morricone's lesser known scores but it's another fucking cracker. I only came across this one last year and it blew my mind a little bit, couldn't believe my ears. Kick off your festivities with this cranked on the hi-fi. This is the score to a 1972 Giallo directed by Massimo Dallamano which features saucy female students, sleazy teachers, nudity, abortions, girls on bikes and murders. What did you expect?

Now this has to be one of Morricone's most underrated horror scores. If you're dropping acid at your festivities tonight this will be the perfect soundtrack! I've never watched the film but the sounds here get pretty insane, perhaps I'll finally watch it tonight. They even made an Exorcist III ...who knew?

Ooh...I just found this. It's a collection of tunes from a bunch of Ennio's Giallio scores, nothing new to me here but looks like it'll be a great creepy mix. Tracklist below.

Gli Occhi Freddi Della Paura - ENNIO MORRICONE
Now this was another 1971 soundtrack but it didn't get a release until 2000. I didn't miss this one. I think it has been reissued again in the last year or two. So Morricone recorded this with his improv band Gruppo Di Improvvisazione Nuova Consonanza. This score is not only one of the best soundtracks ever, its also one of the best albums ever. I guess people into AMM, Nihilist Spasm Band, Spontaneous Music Ensemble or Miles Davis in the 70s should take a special interest here. This is some top notch improv jams under the direction of the one and only Bruno Nicolai. Produced by none other than Gianni Dell'orso. We've got fuzz guitar duelling with jazz bass and electronics. That's just for starters. This LP is so unpredictable you never know where it's heading next. There's many a clank and a scrape to be heard amongst other haunting sounds. The group had been going since 1964 and are considered one of the pioneering collectives of experimental composers. It was by no means Morricone's band. Other members included Egisto Macchi (library music legend), Walter Branchi and Franco Evangelisti. I think it was Evangelisti who got the whole thing together. They were aspiring to a new form of composition through improvisation and other methods such as (like John Cage) chance. Apparently they sometimes used the game of chess as an inspiration. Anyway the credits on this one go to Morricone but that seems arbitrary as surely everyone contributed to each tune. Fabulously free percussion mixed with of sour sax/trumpet(?) and textural keyboards play their part on this recording. More than anything though its not the separate sounds that make up the music, its the sound of the unit itself. This is an incredibly switched on unit comparable to Can and the ensembles Miles Davis put together in the 70s. Half the time I don't know what's making the sounds anyway. This doesn't sound like any other soundtrack I've ever heard. Most of the time you forget this incredibly fluid music even went with images as the tangent of where the hell they'll go next has you so engaged. You start to feel that your own ear is also an integral part of the unit as well. This is a hell of a strange trip that never gets old. They have other albums as well, maybe I'll discuss them another time. Its quite hard to believe a film director just saying 'yeah sure' to this mental project. This is a unique record that could have a special place in your heart if you give it a listen. Like Harmonia's Deluxe this is an unheralded classic of 20th century music that deserves a better status.
Posted by Tim 'Space Debris' at 23:12 No comments: 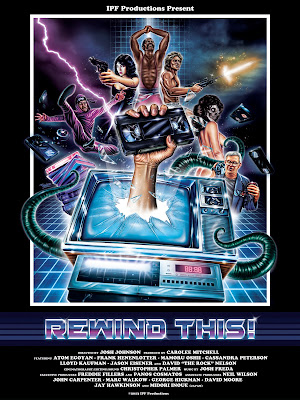 REWIND THIS (2013 DOCUMENTARY)
Here's another doco on VHS culture and another excellent cover/poster. This one is a bit all over the place but it is watchable as opposed to Adjust Your Tracking from the same year (more on that another time). It feels like they're trying to cover too much of video culture all at once though. As if they were in a rush to cover a little bit of each part of the dying, ephemeral culture of video stores and VHS before any other filmmaker got there first. Rewind This was at least compelling enough for me to make it through to the end of the film.

They could have really made 4 or 5 in depth documentaries covering certain aspects of video culture because there is some great subject matter here ie. Cover/poster art, nostalgia for video libraries, how B-grade and horror videos got their foot in the door ahead of studio/hollywood stuff, the bootleg trade/grey market and who the hell is going to preserve straight to video videos. Speaking of straight to video videos, any form of a convincing case isn't really put forth that there is any greatness worth preserving. There however will always be people who are willing to archive and preserve anything no matter how crap or inconsequential it may be because 'it's all relative man.'
Posted by Tim 'Space Debris' at 21:10 No comments:


Here's some of the soundtrack to the 1968 Giallo film Death Laid An Egg. Why doesn't somebody reissue this classic. I have to thank Kat Ellinger and Samm Deighan of The Daughters of Darkness podcast for introducing me to this film and in particular this fucking great soundtrack. They referred to it as 'noise-core chicken jazz'. I think a lot of the noisy chickeny bits have been left off here just leaving the score, which is great on it's own anyway. Bruno Maderna was a serious conductor but he composed as well. He did 10 soundtracks and this was his last.

Speaking of great soundtracks, we've been waiting for a reissue of Messiah Of Evil for years but to no avail. Some odd gems are getting attention though like Richard Einhorn's Shock Waves OST which got issued last year. Einhorn's other great one Don't Go In The House remains out of print. Releases of film soundtracks like Let's Scare Jessica To Death, Deathdream and Slaughter Hotel would be most welcome. Some of these may have used library music though...er...haven't done much research into them.

Anyway check out this creepy movie. It stars the very beautiful Marianna Hill and Anitra Ford. Don't go looking for a cohesive narrative here. I see at it more like a series of disturbing surreal scenes, many of which are unforgettable. It's in the public domain so here's a download link. 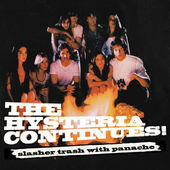 HORROR PODCAST
The Hysteria Continues
I missed this podcast in my recent set of podcast posts. This must have been introduced to me by Bill Ackerman of Supporting Characters. This is the best horror movie podcast I've come across. We've got 4 chaps in three different countries (England, USA & Ireland) discussing their favourite genre of film - slasher movies. They've got the balance just right. Nobody talks over anybody else, they don't speak too fast, they're knowledgable, passionate, funny and have a good formula.

I'm not even what you would call a slasher fan. Sure I like Black Christmas, Halloween and Slumber Party Massacre plus some of the influences on slasher like Peeping Tom and Psycho as well as many Giallo movies. But as I've mentioned before I missed the whole 80s video thing due to boring parents. The Hysteria Continues has had me watching the likes of Happy Birthday To Me, Mortuary, Funeral Home, My Bloody Valentine, House On Sorority Row, Pieces, Slaughter Hotel, Prom Night, The Burning, Chopping Mall and Terror Train. The hosts have also been kind enough to make me avoid many slasher titles which sound like total and utter shite.

The Hysteria Continues have occasionally covered proto-slashers, quasi-slashers and Gialli too. They don't just talk about slasher related things though, they go through general horror films and television in their 'recently seen' segment and often veer off into conversation about other things. Who thought anyone would be talking about Toyah in 2016? There's a great segment on 'top 3s' covering such topics as best final girls, best theme music, best death scenes, best killer masks etc. One of the hosts Justin Kerswell wrote The Slasher Book aka Teenage Wasteland as well as running the website Hysteria Lives. The website The Body Count Continues is/was(?) run by one of the American co-hosts....see what  they've done?...er...combined the two website names and come up with the podcast name. If you can handle puerile humour coming out of the mouths of grown men and love your genre cinema this comes highly recommended. 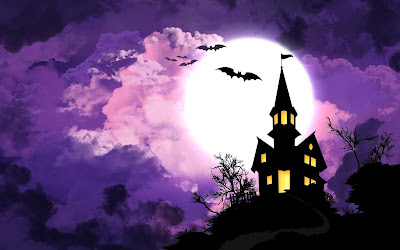 Chewed Up VHS Part I

After listening to a lot of movie podcasts I've decided to have a little look at some documentaries that have passed me by in the last few years. A plethora of documentaries on VHS culture, horror movies, collectors, censorship, video nasties etc. have been released in the last 5 or so years. I've finally caught up with many of these titles and will do a mini review on a few that I've watched. Here's the first. 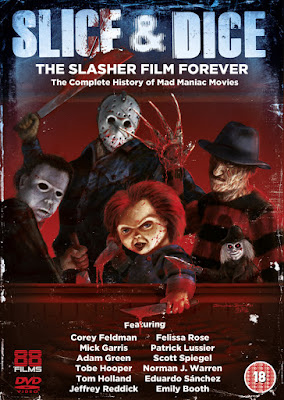 Slice & Dice: The Slasher Film Forever (2012 Documentary)
Slice & Dice is hardly a revolutionary documentary. It's not particularly insightful or comprehensive about its subject matter. Even for the casual slasher fan there isn't anything particularly exciting or noteworthy to learn about the genre here. To combat the staid talking head formula they've framed each head inside a slasher motif ie. a cabin window or a rear view mirror. The most entertaining interviewee is Corey Feldman. I don't really know much about him or his role in slasher pictures, I think he appeared in one or two of the later sequels to Friday The 13th. He is entertaining despite or maybe because of coming across as someone who's been through some kind of trauma and/or addiction though.

The documentary makers go through a bunch of cliches such as the rules of surviving a slasher and how to be a final girl, like none of us had ever seen Scream. They didn't exactly enlist the sharpest of horror commentators for this film either, making analysis of the genre rather half arsed. Like a lot of the videos/films they are talking about here the best thing about this doc is the cover/poster (see above). I guess what kept me watching was the excellent slasher greatest hits clip show that runs throughout. Here's 75 minutes to pass the time or depending on how you look at it, waste it.