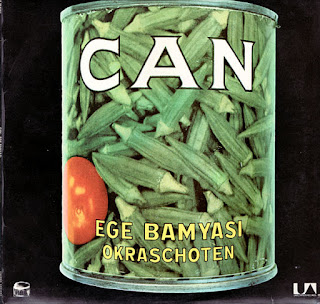 CAN - EGE BAMYASI
Krautrock's sonic Goliaths 3rd studio album proper is their most pop affair. That's not to say there aren't any outré experimental moments though. This is Germanic telepathic polyrhythmic psychedelic rock 1972 stylee. Can had a top ten single in Germany with Spoon taken from this record. Kanye West even appropriated Sing Swan Song wholesale for his tune Drunk & Hot Girls in 2007! - Tim 'Space Debris' Rutherford *

The first Can song I came across was this in cover version form by The Jesus & Mary Chain!

Everyone's doing a bit on Jaki so I'll keep it short and personal. In my book he was the best drummer ever closely followed by Tony Allen. If Can didn't have him they simply wouldn't have been Can. You could say that about all the instrument players in the Group, I guess. They had the synergy, They were synergy! I also enjoyed Liebezeit's drumming on other projects though. He often played on fellow Can members solo records as well as with other great artists like Michael Rother, Eno, David Sylvian, Jah Wobble, Pluramon and Burnt  Friedman.

I think the last time I heard him was in 2013 in collaboration with Burnt Friedman on their 5th instalment of Secret Rhythms. He still had it on Secret Rhythms 5 and I thought he would just go on infinitely like his style often conjured.

How can you choose just one tune from Future days? They all belong together in this sequence. Is this the most cohesive LP ever? Well perhaps you could say that about Tago Mago, Ege Bamyasi and Soon Over Babaluma as well. The tunes on Future Days feel like 4 movements of the one piece.

This blows me mind every time! I could keep on posting Can songs, particularly everything off those aforementioned LPs. Monster Movie, Soundtracks, Landed, Unlimited Edition, The Lost Tapes and most of Flow Motion are great too ......

WE HAVE ARRIVED IN THE PHUTURE

A classic from 96. A pretty ominous title right there and a rather fitting sound for now doncha' think?

Of course these are all Marc Acardipane aliases and that was an alias for Mark Trauner. Marc was THE German producer of hardcore techno/gabba/gloomcore from 1989 onwards, more like a genre unto himself! Acardipane must have had over 100 pseudonyms and trying to collect his full back catalogue must be a futile task but it would be kind of heroic if you had them all. He had a big thing about 2017. I'm not really sure what it was, can't remember if I ever knew, but perhaps all will be revealed this year. On his record sleeves he kept saying See You In 2017. Surely he's gonna make a comeback and be as big as Beyonce....well it's a nice thought anyway. Perhaps It'll just be the end of the world as we know it and Acardipane will feel fine.
Posted by Tim 'Space Debris' at 06:28 2 comments: