Is it just me or has anyone noticed how crap and just plain dull music coverage is on the internet? Has the discourse run it's course? Let's briefly look at a few examples.

All Music Guide - Oh fuck me this is one of the most frustrating music websites in existence. Sure perhaps they shot themselves in the foot right there with their name ie. they are not covering all music and will often just have a couple of reviews for a band with 20 + releases. Even then quite often the reviews are below par or written by people who seem to not like music very much. It feels like some reviewers have been given a job to sit sit through a stack of records from a genre they can't stand. The Monochrome Set's 1982 LP Eligible Bachelors is called a classic in their review yet it only gets 3 stars, that's 6 out of 10. How many classic albums are rated 6 out of 10? Baffling.

Pitchfork - Much to my annoyance I've started looking at this site again due to one Mr Reynolds now doing the occasional article. He's good, can't vouch for anybody else though. They are so embarrassing sometimes like their 50 best shoegazing LPs list and the 50 best IDM records article. You walk away after reading those and just think 'What a fucking clueless list. How are these fucking people in the music writing game?' They are not an authority on music, which begs the question 'Why am I reading this?' Sometimes I think Pitchfork just wish they were as cool as FACT but they can't pull it off because they're not. I mean they've got current stories on The Shins, Spoon and Fleet Foxes for fuck's sake. They just don't have the insight or a capacity to be thinking about music interestingly. They also don't have taste making skills.

I'm not even going to bother examining The Quietus and several others I can't even recall the names of. It's dismal out there. Anyone know of any good sites concerned mainly with music? Maybe I'll have to go back to printed media. Perhaps The Wire's improved in the last couple of years. At least Mojo used to have excellent articles despite their historical stance. NME, Melody Maker, The Wire, Mojo even Rolling Stone and probably a few others (Creem, Spin, Sounds etc.) all knew what they were talking about back in their heyday or at least had some conviction to persuade. Nobody wants to read clueless fucks writing about music and making us bored or angry.
Posted by Tim 'Space Debris' at 18:52 No comments: 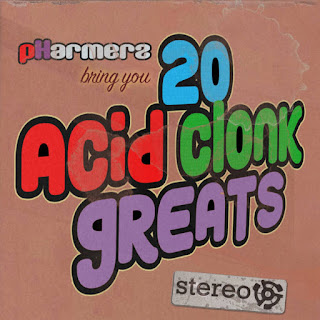 Breaking News.....here's some new music. This is a collaboration between Farmer Glitch and Ekoplekz (who we haven't heard from in ages). 20 Acid Clonk Greats by pHarmerz is 8 tracks on a double 3" cdr or a digital download. The album doesn't include the just below Hack The Tab (part 1) but does include the further below Sheena Is An Acid Casualty.

I am not the guy who has written an article in this month's Wire magazine about Canadian experimental music going by the name of Tim Rutherford-Johnson because I don't have a Johnson at the end of my name. I'd be more likely to write an article about experimental music from Melbourne or Sydney anyway. I did notice there's also a piece on Moroccan trance music which has caught my attention, I may have to actually buy this issue. I'm assuming this article is not about the techno variety of trance, however I may be wrong.

I've been interested in Moroccan music ever since I discovered The Master Musician Of Jajouka in the early 90s. In the last few years after exhaustively listening to my half a dozen Jajouka/Joujouka recordings I've been tuned in to the great blog Moroccan Tape Stash. This blog is a treasure trove with music from pop to sacred trance music and everything else in-between. This scene is still hard to navigate though and can often be confusing. Some of the best tapes posted by Tim Abdellah (a lot of Tims today) on his blog are by unknown artists. I tried to get some youtube clips of the below tape but there's a language barrier. Anyway it makes being a fan of this music a bit more...I dunno...challenging. A bit like in the old days when you had to seek the arcane knowledge of the subterranean music scene, you know before the interwebs. To be honest half the time I don't know exactly what constitutes berber, Jilala or Bendir music. Fuck I like it though. Along with Gamelan music Moroccan music is where I go when current music's not doin it for me, which is 75% of the time.


So this is the record that started it all for a lot of Moroccan music fans. Brian Jones arranged this recording of The Master Musicians Of Joujouka and this LP was issued in 1971 on Rolling Stone Records. All your favourite creepy hipster Morocco dwellers were involved with the liner notes of this album as well ie. William s Buroughs, Brion Gyson, Paul Bowles etc.
Posted by Tim 'Space Debris' at 17:47 No comments:

Now here's another surprise from the San Fransisco pre/proto/post-punk milieu. I rate all those 70s Residents records from 1974's Meet The Residents right up until 1980's The Commercial Album plus all the singles, EPs and tapes in-between. I've heard a few things here and there since, some I've liked a bit and others that I really didn't. 13 or 14 years ago I borrowed a couple of live Residents dvds from the city library. One was a mid 90s concert while the other was from the early 2000s. I really wanted to like these films but they just weren't that good. By that I mean the band had become pretty lame and very boring. Watching those dvds almost ruined the old records for me but thankfully I soon forgot about them. The 70s catalogue remains a treasure to me.

So I was trying to get some sleep during a crazy heat wave we're currently having here in the Desert City. Yesterday it was 44 degrees and today it's currently sitting at 46, that's Celsius! That's 115 degrees in Fahrenheit terms. I went on youtube and found a Residents playlist, hit play and lay down on the couch with the dog at my feet. As I drifted off I could hear some old Residents classics and a few I was not too familiar with. After an hour I woke up just as the above concert was starting. The first track was great but I was expecting it to swiftly get rather shite. No, an hour and a half later I was still transfixed, forgetting the heat for a little while.

The band here are stripped down to a 3 piece and are perhaps a little more guitar-centric than they were in the 70s. Musically/sonically they were in incredible form, at the peak of their powers. They have lost the eyeballs though. Two members had skull masks with grey dreads while the singer had an old clown face mask. I couldn't help but think that the singer's real face was probably quite similar to his mask. Anyway it was a hell of a nice surprise to be engrossed by this concert. Then I started regretting not going to see them when they played in Melbourne for the 'What Is Music?' festival in 2005. Those old dvds had really put me off. So now I'm wondering how much good stuff  I've missed. There's a good 25 years of their work I haven't explored. I'm guessing at least a quarter of it is probably good and quite possibly more.

Ye olde classics from The Commercial Album.
Posted by Tim 'Space Debris' at 14:08 No comments:

Holy shit how the fuck did I miss this? These tapes were certainly lost on me. Half Machine From The Sun: The Lost Tapes From 79-80 was released in 2013! San Francisco's Chrome circa Alien Soundtracks (77) & Half Machine Lip Moves (79) were one of the greatest bands ever, hands down. There were some choice moments on their following 3 LPs too. Chrome's brand of scuzzy sci-fi psych rock was a supremely innovative creep show. So what a belated surprise this was today. These 4 tracks that I've posted could have easily made it onto the proper albums, for sure. Some of this collection's tunes are pretty eye opening and you can see why others were never released. There are even rather commercial songs that were putting me in mind of Roxy Music and even Blue Oyster Cult. I reckon you could cut this 18 track compilation down to about 10 or 11 and you would have a classic missing Chrome LP.

Recently I revisited Hakim Bey's TAZ album that he did with Bill Laswell. I'd heard it on the radio in the 90s. Even local Melbourne fanzines had big write ups on the book and cd. He was some kind of modern day cult figure with his feet in anarchistic and post-situationist camps. I remember thinking he was a bit didactic but had a couple of good things to say about modern life. The TAZ record contained Bey reading excerpts from his book, of the same name, over Laswell's world muzak. So I listened to it last week and it really got my goat. Within the first 10 minutes I thought this guy's philosophy really opens itself up to normalising some dodgy shit ie. paedophilia and incest. Then as I kept listening I was convinced this guy had spent his whole life studying radical movements, anarchism, esoteric history, secret societies and whatever else so he could justify paedophillia. The entire cd became very creepy (not in a good way). I was thinking 'Am I just reading too much into it?' So I went online to see what he was on about. Right there on the interweb was a lot of chatter about Paedophillia and Bey who is also known as Peter Lamborn Wilson. He'd allegedly written for a Paedophile journal etc. etc. Its funny though because I felt so guilty and disgusted after listening to TAZ and some of Wilson's lectures on youtube but back in my early 20s I don't think I ever felt guilty reading William S Burroughs. Another weird thing is that Bey goes on and on about many figures in secret and forgotten history and calls them creeps......the irony.
Posted by Tim 'Space Debris' at 11:33 No comments: