Rick Rubin summed up AC/DC here. Amongst other things he wrote:

A great band like Metallica could play an AC/DC song note for note, and they still wouldn't capture the tension and release that drive the music. There's nothing like it. 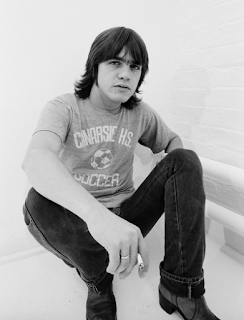 Malcolm Young.
The Centre,
The Core,
The Engine,
The Backbone.
The Heart & Soul,
A riff machine.

The essence of AC/DC is the rhythmic guitars and the minimalist groove.

Malcolm was the fucking essence of AC/DC!
Posted by Tim 'Space Debris' at 00:13 No comments:

The atmosphere on these tracks is just so....now. Is World War III really going to be about a couple of drama queenz having a bitch fight in the sand pit about who's old, short or fat? Ye olde cartoons were smarter than that. Kim & Don are are the dim wit kids in grade one you felt sorry for. This here is the soundtrack for the schoolboy/world leader dust up which was made in 91/92 with a vision to 2017. I'm worried Marc Acardipane is some sort of Nostradamus type figure. I mean like Nostradamus (as in a psychically freaky fortune teller for the ages) and not just into him as Simon Reynolds mentioned at the beginning of the year on my blog. These aren't even Marc's most pulverising beats, It's all about the blackest gloomiest synths and sound generators. Some of these beats are almost quite fun. Music for the surviving cockroaches, ants and mutant sea creatures to joyfully bug out to while the ghost of humanity looms in the post-apocalyptic air.

*All of these tracks have been remastered and reissued in digital form in 2017. Frontal Sickness, Final Sickness and a compilation called Selected Classics have been part of Acardipane's reissue campaign by Planet Phuture. So far it's been all about The Mover and Mescalinum United, I wonder if any of his other aliases will be getting the remastered treatment?
Posted by Tim 'Space Debris' at 18:44 No comments:

You can always depend on Pete DevNull to come with something fucking cool around Halloween for lovers of the darkside of the hardcore continuum and this year is no exception. This fabulous mix, that was posted a few days ago, is some of the most shadowy old school jungle you'll ever hear. According to Blog To The Old School some of these tunes are mega rare white labels and unreleased trax from back in the day. I reckon I only recognise 3 or 4 of the platters in this set. You know the score!

If you love the darkside I suggest you go through the BTTO archive of mixes. One year (2012?) Pete did an epic 3 hour set for Halloween which is one of my favorite all time dj mixes. There's a bunch of fantastic darkside sets from DevNull that should keep you going out of your brain for some time.
Posted by Tim 'Space Debris' at 22:12 No comments: