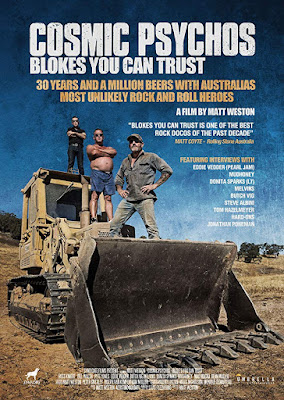 Blokes You Can Trust (2013)
Drove me up the wall I ain't no spider! A documentary on underground Australian rock legends The Cosmic Psychos. More of a cult of personality doc than an analysis of their music. Pretty entertaining. 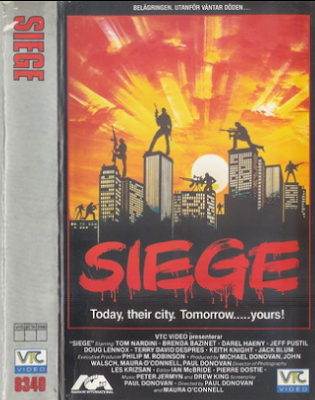 Siege aka Night Warriors aka Self Defence (1983)
Very crafty siege thriller. A police strike causes Nova Scotians to take the law into their own hands. An armed right wing gang walks into a gay bar then the drama unfolds. Fabulous minimal electronic score too. Canuxploitation rules!

Annihilation (2018)
A sci-fi trip out or a complete load of shite? If I watched it off my head perhaps it would have been the former instead of the latter. 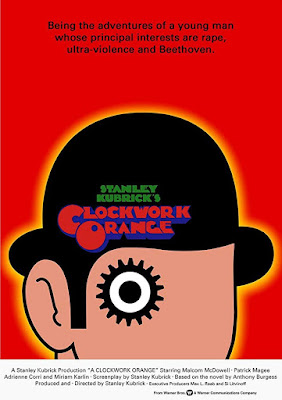 A Clockwork Orange (1971)
Havn't seen this for years. Got the Blu-Ray but can't bring myself to put it on. 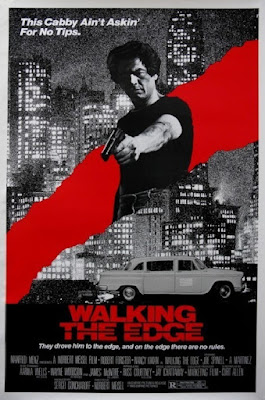 Walking The Edge (1985)
A revenge movie with Nancy Quan, Robert Forster, Joe Spinell, a high body count, the mean streets of 80s LA etc. A Shambolic film, not without merits though. This one's for the cult film enthusiasts looking for deep cuts.

Sherman's March (1986)
A directionless yet fascinating sometimes bloody boring doc about a self absorbed American wanker who travels around America's south not making his intended documentary. He's led from town to town by his penis as he courts a bevvy of women. For a an uncharismatic man he does quite well for himself. It's amazing what over-confidence and a camera can do for you. Mental actresses, mormons, self sufficient counter-cultralists, doomsday preppers, libertarians, anti-nuclear protestors and even Burt Reynolds all feature in this meandering time capsule of a film.

The Witch (2015)
Fuck this is the most overrated and boring horror film. Horror podcasters/writers are starved of good content so a film like this ends up being highly rated to try and keep their so called subculture alive, hang on to advertisers etc. despite how underwhelming it is. 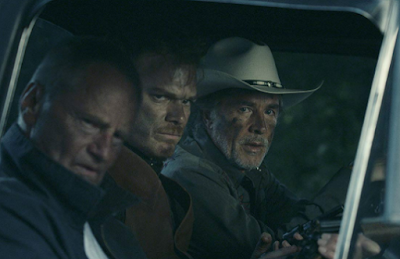 Cold In July (2014)
This thriller/urban western/revenge film's got Michael C Hall with a mullet, Don Johnson as a cowboy, a bit of ultra-violence & a brilliant soundtrack. Good times. 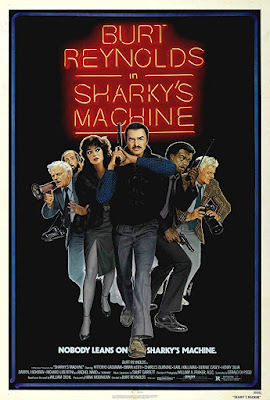 Sharky's Machine (1981)
Burt Reynolds directs and stars in this weird crime thriller/cop movie set in Atlanta. Drugs, hookers, politicians, murder and romance included. The cult builders are trying to put this strange film on the map, with good reason. Perhaps Reynolds missed his calling as he may well have become an incredible film director. 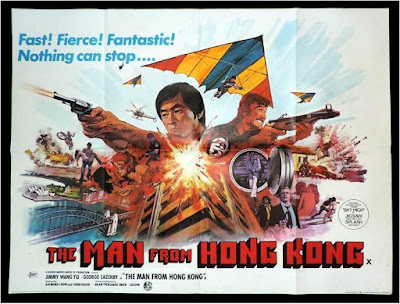 Man From Hong Kong (1975)
Aussie chop-socky flick that should have had at least half an hour left on the cutting room floor. It's alright though due to several set pieces that are masterful and stunningly visceral. 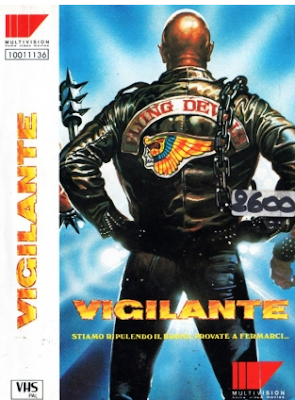 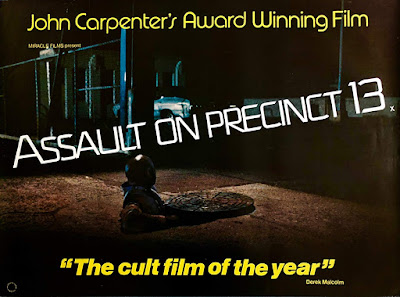 Assault On Precinct 13 (1976)
Great siege movie that's in the past, of its time and timeless all at the same time. Best theme tune right here folks. 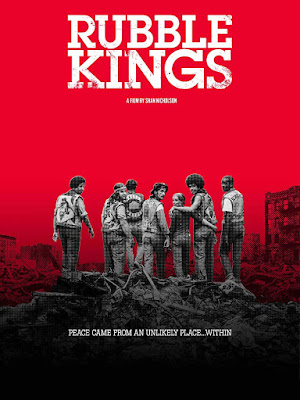 Rubble Kings (2015)
Brief doco on the roots of the roots of hip-hop. What was happening in NYC during the 60s & 70s before the rise of Herc, Grandmaster, Bambaataa, bloc parties and Style Wars? Well...a whole lotta violent gang war shit. Interesting side note: they couldn't afford what they originally had as the soundtrack so only one tune survived. Highly recommended. 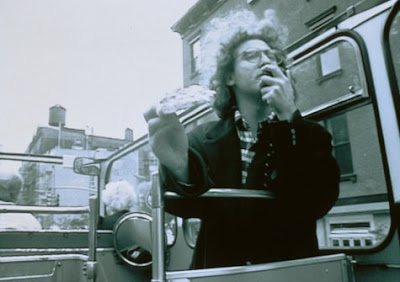 The Cruise (1998)
Documentary about Timothy Speed Levitch. This film is a portrait of an eccentric New York bus tour guide with a gift for prosaic speech. It all begins rather charmingly and funny. Towards the end you realise that perhaps his mental illness is taking its toll, not just on the subject but the audience as well. I felt like I just spent 25 minutes too long on this bus trip. This curio needs to be experienced at least once though. 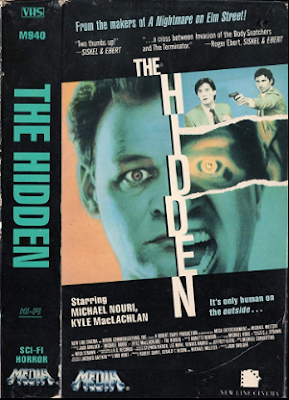 The Hidden (1987)
Here's an underrated movie. A shoot 'em up sci-fi thriller starring Kyle Maclachlan as a pre Cooper/Dougie FBI character. How I missed this at the time is something I don't understand. This is a quintessential 80s film. The Hidden would go good on a double bill with 1986's Night Of The Creeps. 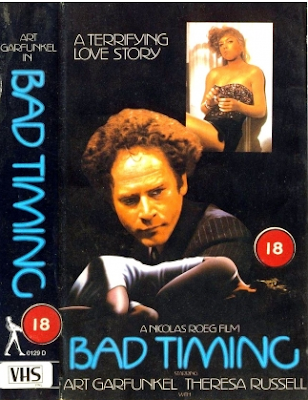 Bad Timing (1980)
Nicholas Roeg at the peak of his powers right here. He gets great performances out of some inconsistent actors Art Garfunkle, Theresa Russell and Harvey Keitel. Grim psychodrama magnificently executed. Not a joke in sight. 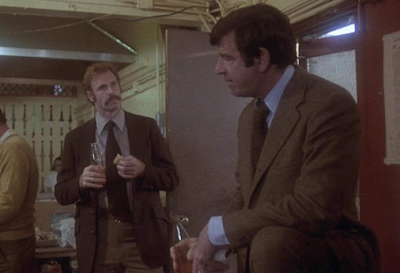 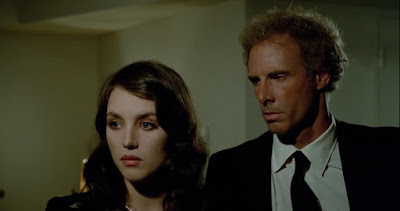 
I was listening to this the other day through the computer which was transmitting to a stereo system via bluetooth. The bluetooth wasn't functioning so great with interference, static, clicking, distortion and kept cutting out. Before I got around to pairing the computer to the stereo again I kept listening. If I'd just walked into the room and heard these sonic textures I would have asked 'Is this the new Ekoplekz album?' so I just listened to the rest without fixing the bluetooth connection.

Ekoplekz might be a fan of this for all I know. It's got all that pre-industrial electronic stuff going on and I guess it's not that far removed from your industrial/pre-post-punk of Cabaret Voltaire, Throbbing Gristle, Residents etc. This is the sort of stuff (Egisto Macchi, Moggi, Bruce Haack, Gyl Trythall, M Zalla etc.) I was heavily into in the mid/late 00s via sharity blogs. Later, reissues started popping via The Omni Recording Corporation and a bunch of other record companies. Anyway amongst Garson's catalogue are a couple of other classics, specifically the pastoral loveliness of Mother Earth's Plantasia and the mischievous sinister sounds of The Unexplained: Musical Impressions of The Occult under the pseudonym Ataraxia.

*This has been reissued in the last month according to discogs.
Posted by Tim 'Space Debris' at 16:17 No comments:

Tropical Fuck Storm - You Let My Tyres Down


Sometimes it's hard to deny a great rock song innit? Best thing since this beauty below from 2005.

That Tropical Fuck Storm tune is new. Gareth Liddiard formed this new group last year with fellow Drones member Fiona Kitschin. Other members include Lauren Hammil (High Tension) on drums and Erica Dunn (Palm Springs) on guitar and other stuff. Their new debut LP A Laughing Death In Meatspace is more immediate, experimental and varied than The Drones. Oh and the chemistry! The drumming is the best I've heard since Per Byström (Ooga Boogas), there's great girl/boy vocals and the guitar interplay is astonishing at times. The song structures are impeccable while they may appear chaotic they never fall apart. It's a pretty fuckin' good record. 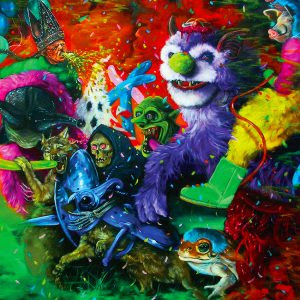 To top it all off it comes in the best album cover since.....I dunno... a time when LP covers were good and an integral part of of the whole musical artefact. #MakeAlbumArtGreatAgain.

Confusingly this 1981 EP/mini LP Cut Lunch made both the singles charts and the albums charts.
Posted by Tim 'Space Debris' at 02:30 No comments: