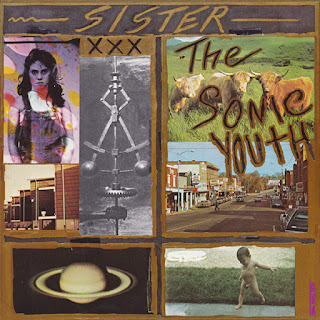 Sonic Youth - Sister
I think Schizophrenia, which opens Sister, was the first Sonic Youth song I ever heard. This was on a visit to the big smoke in 1987 and it was played on either 3RRR or 3PBS in Melbourne. What an introduction to a phenomenal band. I’d listened to the Primitive Calculators, The Birthday Party and Cosmic Psychos before but who knew you could make noise beautiful? This is probably the Sonic Youth album I’ve played the most. The cover was perfect. This is the sound of skyscrapers, cows. suburbia and intergalactica all rolled into one. Cotton Crown still sounds unbelievable today with its girl/boy vocals and those swirly out of tune guitars then when that change where the bass goes bezerk Sonic Youth elevate rock to one of its loftiest peaks. This band were on an outstanding roll that had begun with the two previous LPs and would continue for their next three records. Then as elder statesmen/women of art rock they had a terrific late re-flowering and issued a classic trilogy of albums that began with 2002’s Murray Street. Sister = Awesome!