Before Position Normal & Ariel Pink there was zero budget hazy lo-fi 90s Memphis Hip-Hop! Kingpin Skinny Pimp was the godfather of the Gimisum Family, one of the city's best posse's during the 90s. Due to the Weirdest Hiphop Cover Art account on Instagram unearthing all the worst album cover art of regional 90s & 00s hip-hop, I've gone back to listening to 90 Memphis rap big time. I might be here for some time because I think this is just about the best music sub-genre ever. It just doesn't fit neatly anywhere putting it on the outside of everything in hip hop at the time. I guess some of this stuff got played in cars and clubs but it really feels like music for being wasted at home either on the couch or at a bbq. I'm still waiting for a book to be written on this amazing DIY cassette culture scene. It's not just the eerie recorded in their mum's toilet aesthetic that is appealing. An entire different creeping rapping flow was invented but who originated it is a contentious issue. Memphis rap themes were innovative too. They added horror, psychosis, suicidal depression, the occult, devil worshipping and apocalyptic paranoia to the criminal, pimpin & homicidal gangster game. There were also stacks of bad-ass lady rappers which was unlike most rap scenes at the time that I know of. The selling of the tapes was different too. They were often sold from stereo & car retailers. Details on the scene are still pretty sketchy with loads of wrong infos on Discogs and other sites.
Anyway this Skinny Pimp tune is pretty out there with it's no fi psychedelic singing amongst the rapping & laid back beats. Then there's that crazy clunky sample intrusion at the 3.17 mark. What an insane trip. What year this was released is anybody's guess. It might be 1993 and it's possibly from 1995 but I'm gonna go for Memphis Rap's crowning year 1994. 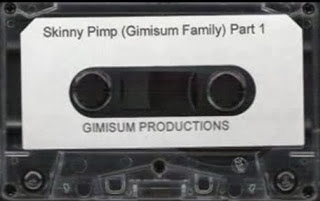