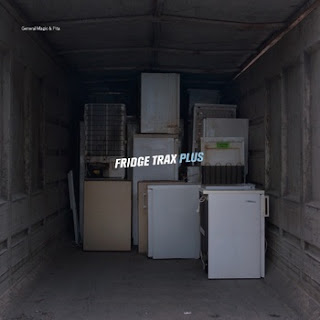 FRIDGE TRAX PLUS- GENERAL MAGIC & PITA
Never had this one back in the day. I saw Pita live once that was odd and I had that General Magic album Frantz. So this 2015 reissue features both the original Fridge Trax (95) EP plus the Live & Final Fridge (96) cd. These sounds originate from microphones in fridges. It really compliments my recent Conrad Schnitzler and Ekoplekz listening. My own fridge sometimes sounds like it has got a groaning man inside and on other occasions it sounds like there's a party going on in there. Maybe I should record it as a tribute to these Mego guys. Anyway they fucked with the fridge source recordings and made two classics of 90s electronica (for want of a better term). 90s electronic abstract goodness. Delve deep into the ambient, rhythmic, almost funky and strange droning netherworld of fridges. This is pretty awesome stuff. 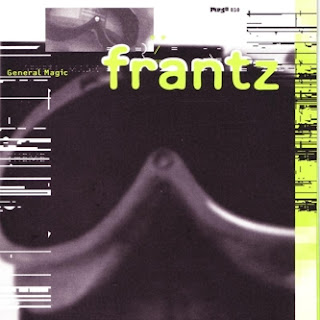 FRANTZ - GENERAL MAGIC
All this of course has led me back the aforementioned debut cd from General Magic, Frantz. I even found an old Farmers Manual cd I'd pretty much forgotten about, FSCK. On this mission I also came across more old cds made by Germans in the 90s like Oval, Lithops, Pluramon. Wabi Sabi, Hecker, Microstoria and Mouse On Mars, but i haven't listened to those yet except one. Anyway Frantz is surprisingly a great listen today. I can't stand the use of the word abstract in music writing. Sometime in the 90s its usage became overused and lost its meaning in the process. In the 90s Frantz and Fridge Trax would both have had this term applied to them ad nauseum by the critics of the day. Anyway General Magic are coming from abstract 70s Schnitzler zones whether they were aware of him or not. This is low key electronic ambient soft noise with added randomness. 90s technoid vibes mix with historical electronic music flavas here. General Magic play with these soundz to a microscopic degree giving it a peculiar scientific almost muzak vibe 90s stylee. This cd is hard not to like, in fact I think it has risen in my estimation since 1997. Frantz has gone from forgotten little gem to a classic of 90s electronic zones. 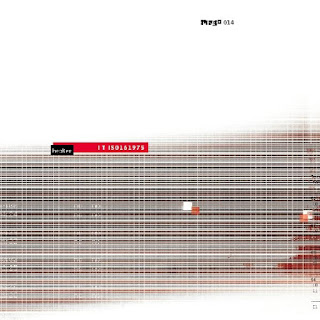 IT ISO 16191975 - HECKER
This is the other 90s German thing I did give a little listen to. Florian Hecker, who I also saw live once and I vaguely recall it being a pretty good show with lots of visual glitchy super 8 film sort of stuff. The visual element really added to the soundz. Listening to IT ISO 16191975 today without any visual accompaniment is a strange experience. I can't really recall what I made of this cd at the time but I guess that glitch aesthetic was all the rage back then before it got totally overdone a couple of years later. I was left a little flummoxed by it all yesterday, I must say. Hey that's probably a compliment if art is still doing that 17 or so years after its creation. It starts out with +1 which is 7 minutes of barely audible hums and drones. +2 is slightly louder with its minute drones, miniature oscillator feedback and subtle short wave sounds that are manipulated glitch stylee. +4 could be rain or static for the first two minutes then a dub glitch vibe ensues with sound sources untraceable. Maybe there's a note from a keyboard in amongst the rumbling silence. Pop music this sure ain't. This is difficult listening that could also be ignored unless you really pump up the volume high on your sound system. Get flummox reward points here. 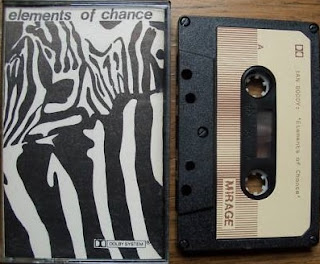 ELEMENTS OF CHANCE - IAN BODDY
Jonny over at Die Or DIY? (see right hand side Other Stuff) alerted me to this classic tape from 1981 by Ian Boddy. Boddy was a UK analogue synth chap doing Kosmische electronics past their use by date, some classic early drum machine action plus a bit of minimalism too. Elements Of chance takes in new age type vibes and dark ambient noises as well. You could slap a Panabrite label on here and I would be none the wiser. I mean that in the best possible sense for everyone mentioned! This is very good stuff. There is another Boddy tape posted over there as well, looking forward to listening to that. O.M.M.I.O.2 - RJ
DRILLUMINATI 3 - KING LOUIE
INTROVERSION - STARLITO
I don't know what has happened to my appetite for rap? I thought this one might get me back into the swing of things from the mean streets of the USA but I'm not fully diggin II but it certainly has many a fine moment. It opens on a particularly high note with Blue Face Hinnids where the sounds of Mustard, HBK Gang & Larry Jay are becoming so intertwined I don't even know who's on the beat here, it could be someone else entirely? It's probably not RJ's fault that my vibe has migrated away from these zones. II sounded like a fuckin masterpiece (well it's kinda 3/4 of one really anyway) next to King Louie's new one Drilluminati 3 and he's been one of my favourite rappers of the last few years. I was a fan of Drilluminati (1) so it's hard to believe I immediately deleted this but that's what happened. Free stuff eh? See maybe if Drilluminati 3 wasn't free I'd probably have bought it and then spent more time with it due to the financial investment. This may not have improved the actual contents but it may have given it time to grow on me. Having said that I've just had one quick listen to Starlito's new Introversion and it sounds alright. Two out of Three ain't bad so maybe I'm not done just yet with the rap game.
Posted by Tim 'Space Debris' at 19:43