A new month must have ticked over because hello we've got a new Ekoplekz release. I couldn't sleep, went on the interweb, saw Reflekzionz was coming out. By chance I checked i-tunes and they had it available a week or so early. I couldn't wait for the physical copy, being the instant gratification era and all, several clicks later walla! the album was sitting in my i-tunes and my earphones were sitting in my ears. How was I meant to get back to sleep after that? My excitement levels were high and 3 hours later Refekzionz was still swirling around in my brain. Thank god it wasn't a work night. Then I started hearing chooks. I had to give it a rest. These 12 trax at 54 minutes will be released on Planet Mu as a double LP. Something had to interrupt my Conrad Schnitzler obsession. Of course this recording led me back to current music in a very smooth manner as Nick Edwards aka Ekoplekz would probably be a big fan of Schnitzler's. While I mentioned in my article on solo 70s Schnitzler that he had an immense spatiality in his music, as large as King Tubby's, on the 1978 classic Con, that didn't mean Conrad was informed by or using similar techniques to Mr Osbourne Ruddock aka King Tubby. Mr 'Ekoplekz' Edwards however does come from from a dub lineage that was probably picked up from the likes of 70s Cabaret Voltaire who probably were into King Tubby and dub in general. I guess the feel here is more like post punk stylee dub filtered through German 90s dub-tech like the Pole/Basic Channel/Chain Reaction milieu. I guess they're interesting parallels caused by my own recent listening habits but funnily enough it's all fairly closely related in a coincidental manner to Ekoplekz and his new LP.

Opening tune A Caustic Romance continues Ekoplekz's foray into melodic idylltronic zones albeit over a gritty but almost cute clipped industrial-lite beat. Quakers Road Skank is awesome robotic electronics. Seduktion is radiophonica funk that sounds like it was recorded in the emptiest place in the universe giving it an uncanny hollowness. Repeater (How did it feel?) is as fucking good as classic ambient dub tech gets. Downtone is wintry technoid dub with amazing bass tones bringing the foggy darkness in close and those rudimentary beatz feel like their trying to warm up but their coal's running low and there's no 50 P's for the meter. The classic British isolationism, with extra synth squelches, of Midnight Cliffs is next and it couldn't have a more perfect title.

Tremulant is a slice of ye olde Ekoplekz with its alien warfare dub splatter but as has been recently noted Edwards now has his once outta control machines in line and almost compliant to his every command. Dubnium 268 is a dark techno ditty but kind of playful at the same time. On this tune and at several other stages during Reflekzionz I'm taken back to my Cologne days in the 90s. In an unusual moment of zeitgeist there has been an article over at FACT, I noticed, on the likes of some of my 90s Cologne faves ie. Mouse On Mars, FX Randomiz etc. Maybe Ekoplekz is trendy now. Canon's Marsh is is a marvellous piece of technoid minimalism with curious reverbed drones that leave you slightly mystified as to what that felling you've been left with is. That's quite a remarkable artistic achievement. Ominous transmissions create an insidious intensity on Black Calkz. The machines here sound as though they could run out of power any second as a power surge is imminent and the circuits feel like they're about to burst. Saturation (Full Rinse) is an Ekoplekz banger! Nick Edward's has been heading towards this zone for a while and perhaps he's finally achieved this goal ie. a tune that could get played out. Just as you're thinking that though his erratic machines, who have been acquiescent throughout the entire LP, seem to have a sinister plot to sabotage his plan, by being contrary and slowing the bpms right down toward the end. Day In May is glowing sunshine one minute and pastoralism gone awry the next which brings Reflektionz to a close.

Halfway through like the 2nd listen I was beginning to wonder if this was perhaps a concept album or some kind of tribute/homage to the 90s. Even in this review I've used the word classic several times. The thing is with Ekoplekz is he could never pull off a homage record, like say Urge Overkill's Saturation where they recorded brilliantly perfect facsimiles of some of their favorite 70s stadium rockers like Kiss, Cheap Trick etc., because with Ekoplekz it will always be Ekoplekz. You may have been able to detect Cluster or Cabaret Voltaire influences previously (probably still can) but it's never a straight copy because he's always reshaping sounds and experimenting. He uses their ideas as much if not more than their actual sonic artillery. That's probably not a good way to make millions of bucks but his idiosyncrasies will always endear him to original music fans. When I think of Ekoplekz I don't usually think of the 90s much, I mean sure a bit of techno but to me that's like 15% of his shtick. A reactivation of several 70s approaches to music but with a here and now experimental feel is how I have him pegged in my brain. Experimenting, moving along, not giving a fuck about fashion and well just making cool dub inflected electronic music is what Ekoplekz are all about. The first song A Caustic Romance could be a dead giveaway ie. Is this referring to his love for Aphex Twin's alias Caustic Window? I mean I'm sure he listened to some of the same gear we all did in the 90s like rock, house, bleep, hardcore, ambient dub, techno, jungle, trip hop, darkside, electronica, isolationism, gabber, trance, tech-step, speed garage, post-rock, pop and whatever else I can't think of right now. It just hasn't seeped through so much until this LP. Maybe next month we'll have a bizarre take on music from the 00s by Ekoplekz. Not sure he'll have much to work with there. Perhaps he could go back further to say the 60s. Anyway he's on quite a roll isn't he? This is his 3rd fine double LP in 12 months then there have been mini albums, EPs... 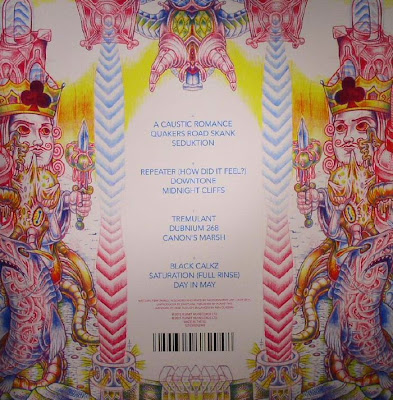 *On Twitter I got a reply from the man himself. See below.