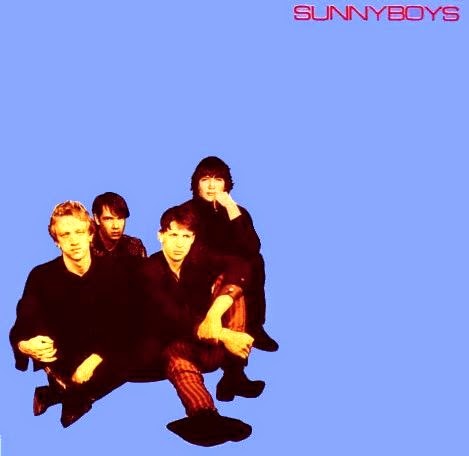 Another great year for ye olde music. In this list are only things I missed first time round (or 2nd or 3rd or 17th) ie. it doesn't include Blue Bell Knoll, Doolittle, Spiderland, Cannibal Ferox, Cannibal Holocaust, Friday The 13th, Led Zeppelin Vols. 1, 2, 3 or 4 etc. Oh...and no Bedhead or Mogwai because they were..er...shite. Then there's the never really owned category ie. I've only ever had taped copies of The Sunnyboys and Since The Accident or crappy mp3s of Electricity, The Boogey Man, Forbidden World, Chopping Mall etc. so they're included. 2014 was a hell of a year for cult horror synth score reissues! It's like all the soundtracks I've been looking for were all released at once. Labels like Soundway & Finders Keepers continue to unearth fabulous music. Death Waltz, Waxwork, One Way Static, Luxury Products & Superior Viaduct are the new(ish) labels on the block giving us what we want from the esoteric archives as well. So here's 20 great old records.

Sunnyboys - Sunnyboys
The sound of my childhood and my older brother's record collection. One of The classic Australian rock debuts. The Sunnyboys were young, charismatic, troubled and so alive. Their first record is some of the most exciting guitar music from 1981 or any other year for that matter. It came with a bunch of bonus tracks but who needs em with an LP this fanfuckintastic?!

Axemen - Derry Legend
The Axemen reissue program continues. After their 1986 mangled pop masterpiece Three Virgins came the follow up Derry Legend which has been long out print. This LP has gained (Derry) legendary status in my brain. Derry Legend is The Spotlight Kid to Three Virgins Trout Mask Replica if you get my drift ie. it's a more accessible pop version of the band yet still retaining all their strange awesomeness. 80s NZ rock doesn't get much better than this.

Caustic Window - Caustic Window
Strangely unreleased but excellent LP from Richard James aka Aphex Twin from his golden era 1994. Why on earth did this get shelved? A timely reminder of where all your favourite electronica (remember that 90s term?) comes from.

Peter Jefferies - Electricty
He of classic underground 80s NZ group This Kind Of Punishment and Bruce Russell's right hand man at Xpressway Records. He's so idiosyncratic only Peter Jefferies sounds like Peter Jefferies and the world's a better (If slightly darker) place for it.

Severed Heads - Since The Accident
A key LP from Sydney's early 80s experimental scene. Still pretty much ignored here in their home country to this day. Wake up Australia!

Susan Justin - Forbidden World OST
The cultiest synth soundtrack of them all. Issued for the first time since Web Records released it in 1982! A one off unique blend of electronics, pop and soundtrack motifs. Death Waltz continue their roll.

John Harrison - Creepshow OST
I finally got a copy of Creepshow after like it's 5th or 6th reissue. More 80s psycho synth sounds from 1982.

Bruno Nicolai - All The Colours Of The Dark OST
Italian Giallo score from the great Bruno Nicolai. Nicolai was a frequent collaborator with Ennio Morricone. It doesn't get much better than this for spooky Italian 70s soundtracks.

Bruno Nicolai - The Case Of The Bloody Iris OST
This is from 1972 as well (see above) and it's another slice of Italian horror soundtrack weirdness. Haunted yet bizarrely jaunty at the same time.

Hungry Man - Keyboard
More crazy keyboard action from West Africa in the late 70s. If you thought William Onyeabor was the last word in spazz synth psych afro funk you were wrong. Some of the best sounds ever squeezed out of a synth and put to tape. Is there more of this shit yet to be discovered? I hope so.

Various - The Sound Of Siam 2
A splendid second serving of Luk Thung & Molam tunes from Thailand. This time from 1970 through to 1982. Incredibly distinguished, beautiful and laconically groovy.

John McCallum - Surf Nazis Must Die OST
Classic 80s drum sounds, synths in overdrive and anthemic guitars. There's even a wayward noisy sax at one point. It even becomes poignant and a little melancholy at certain stages. Surely this is where Mark McGuire got all his ideas from.

Various - Suburban Base Records: The History Of Hardcore, Jungle, Drum & Bass 91-97
Hardcore you know the score and if you don't check out this compilation from one of the best labels of the era.