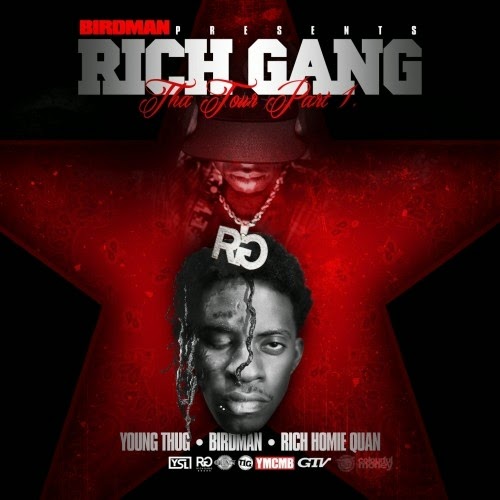 I must admit I kept looking at this on Datpiff and wondered 'To download or not to download? That is the question.' It looked like it would be a bit like last year's Boss Yo Life Up Gang mixtape which was Jeezy, Doughboyz Cashout & YG. It had a few good moments ie. DJ Mustard's trax but the rest hasn't stuck with me, maybe I'll have another listen to it actually. Mixtapes are free and hey this has got Young Thug on it, so surely it's a no brainer plus Rich Homie Quan's Still Goin In Reloaded mixtape from last year was one of the finest. I finally downloaded it. I was enjoying it a lot, until I realised this phrase 'Rich Gang' was being drilled into my head, like every 15 seconds. This started to gnaw away at my brain to the point that 5 or 6 listens in I couldn't take it anymore and had to switch it off. It was a bit like havin someone with Tourette's Syndrome yelling 'Rich Gang' at you for over an hour! Hey Birdman I know it's free and all and I don't want to seem ungrateful but surely the point is to get us to listen to the tape, not turn it off. The 'Rich Gang' phrase was used to the point of overkill. Maybe less should have been is more in this case. Having said all that I was enjoying Tha Tour. Flava's got a great spooky theremin going throughout, makin it a hell of a tasty track. I Know It 's beat is a dub-meets ratchet vibe that's irresistible, surely it could be a hit single. Throw Your Hood Up had me going back to and reassessing DJ Mustard's neglected (by me) 10 Summers as it has a tune with the same title. Imma Ride, Bullet, Who's On Top, 730, War Ready and Pull Up also stood out at this point of listening.The rest was probably gonna grow on me but if I return to the tape, I fear, I might get pushed over the edge by the 'Rich Gang' chant. Which is a real shame. Maybe these tunes are elsewhere, or on i-tunes, without that repeated phrase. Hope so.