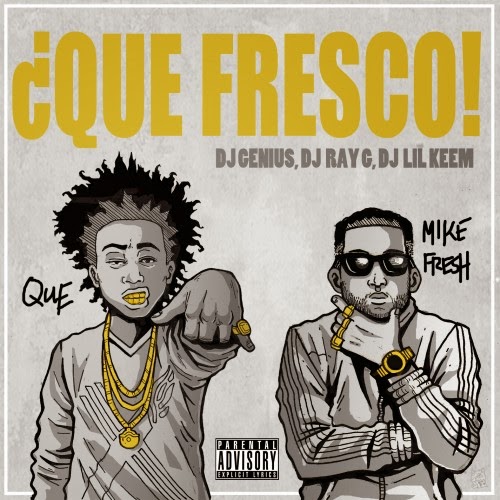 Dunno who they are or where they came from (all I know is Mike Fresh guested on a Zuse tune this year) but this has got instant classic written all over it. It's a rap mixtape that's totally of it's time ie. not that dissimilar to their contemporaries except they nail every track with total conviction (hey that's bloody rare in the rap mixtape scene) and bring their own shapes and flavas, particularly their singing. Que & Fresh keep it tight with twelve tracks at 40 minutes. I reckon that's about the perfect length for any type of album. Keep in mind Illmatic by Nas ran at this length. Unlike the previously reviewed Kool John Presents... $hmopcity, this tape does have djs the hood rich monopoly people and such. I'm so used to misogyny, casual violence, homophobia and whatever else in rap, I don't know if their song Gas Station is racist or whether or not to give a shit? It's sung in an Indian accent and is sort of about running a gas station. For all I know Que or Mike might be of Indian heritage. People still rate the film The Party with Peter Sellers so who knows? Apu in The Simpsons - Is anyone outraged by that stereotype? The Indian guy who just served me at the Petrol Station, does he care? Anyway that song is so damn catchy it could be a novelty hit which could destroy their career but then again the world needs one hit wonders. Doncha think there's too much longevity in pop now? GaGa, Robbie Williams and bloody Beyonce should have fucked off by now. Longevity was for Frank Sinatra, Bing Crosby and Neil Diamond. I don't know if I get what Que & Mike Fresh are on about on every tune but hey I love Young Thug, what's he on about?

Uno Dos Tres opens the mixtape with talk of molly, strippers, designer spex and something about being a pimp like Johnny Depp? Hooks and eerie synths galore. Ahora is some kind of homage to Speedy Gonzalez and rapping about splitting an avocado which could be about guacamole or sex, perhaps both. The 'Ahora' chorus which is sung has a brilliantly strange and irresistible melody What Part Of The Game is a sledge aimed at rappers who sell out and sycophants who claim to know you when you become someone. More hooks, more catchy tunes. Yes Men follows the former's themes and this is all played out over a minimal askew gamelan sample and awesome spooky organ sounds. By The Way claims to be a hit and its off kilter ratchet/trap plus the 'By The Way' hook should make it one. Next it's the aforementioned Gas Station which is sung in poptatstic fashion. This is the kind of song you wanna learn all the words to, just because you love it so much. Tricky's all about flippin a brick er..I think that's selling like a key of cocaine or is it money laundering? I dunno I ain't no gangster. The bpm count is up this one, it's fast and clever. These guys don't mess around, they get in and out quick smart with no dilly dallying. Dope Boy Dress Code is a song with rapping and is quite possibly the tune of the year along with Ahora. This is so addictive. Que & Mike have incredible pop smarts. These guys are future stars if they aren't already. Oh My God is more hooks rapped and sung (is that a little two part harmony?) with wicked beats, I love that symphonic drum fill. You gotta love songs about food. Soul Food's about 'damn good chicken, damn good greens, damn good cornbread, damn good beans.' all sung in a scrumptious manner sprinkled with little mentions of molly & lean here and there. FKI's on the beat on the final track I'm Tired and what a beat with these strange piano rolls and like a mental octopus drum machine. Toward the end a dj yells 'another mixtape masterpiece man!' Well that statement is hard to disagree with.