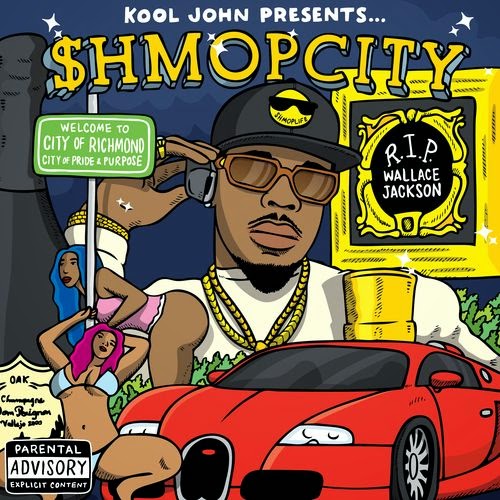 Now somehow I missed this one a couple of months back. This could very well be the mixtape of the year.  Kool John's part of the Bay area posse HBK Gang. So there's plenty of his mates here particularly IAMSU! as well as Skipper, Sage The Gemini, Jay Ant, P-Lo, YP $poelstra (who's also in contention for mixtape of the year along with Skipper), Dave Steezy, Young Bari etc. This is a hell of a gang with such high quality tunes and productions. This is more like a proper album with no dj throughout, which seems to be a trend in mixtapes. I know it's on i-tunes as well as LiveMixtapes but I don't know if it's made into to physical form.

RNS is a prime example of ratchet's deceptive simplicity with its claps, heys, classic 80s bass and little eerie piano refrain along with laconic yet catchy singing and raps. Wobble is a standout in a tape full of highlights. Horror piano, anthemic strings and a banging hook, would surely make Wobble a possible number 1 on the hit parade. Next Day is about girls, being purped up, having too much cash etc. Okay is a haunting tune with a menacing lyric delivery and a killer bassline. Scary and hair-raising! Just as I'm thinkin Okay is very John Carpenter/mid 90s Memphis the next tune is Smoked Out which contains a sample from Triple 6 Mafia's mixtape Smoked Out, Loced Out from 94. Layin Low In The Cut is a paean to smoking da weed with an insanely upbeat catchy chorus. Do Ya Dance is a sonic tour de force with it's weird manipulation of the background vocal sample, slowed deep frightful male voices, a female hook sung by Chi'ma and other queasy sonic detritus. Ready's keyboard is the most gorgeous sound I've heard this year making this one hell of a smooth sex jam, R&B in excelis. Bang Bang changes up the vibe from sex, drugs and materialism to that old hip hop chestnut violence, just to let us know not everyone's oversexed and chilled out on Lean, Weed & Molly. TBT has some incredible rapping from Sage & Show Banga about, you know, booty, coochie and woody's. Shmoplife Party closes proceedings with grim synths and the most mental bassline of the tape. It's an odd ode to hedonism. But it's a classic laid back party choon California stylee, a little reminiscent of prime Dre & Snoop.

Sage The Gemini, IAMSU!, Skipper and YP $poelstra have all released excellent albums/mixtapes this year. In YP's case two excellent collections Heat Vol 1 & 2. Now you can add Kool John's $hmopcity to that list and this may be the best of the lot. This is a run only comparable to Wu-Tang's run of solo records from Tical to Ironman. High praise indeed.
Posted by Tim 'Space Debris' at 15:48