So this is the fourth Church LP, which also means it was their fourth classic in a row. What a winning streak they had going in the 80s. Heyday was then followed up with Starfish another classic. The winning streak was then interrupted by the follow up to Starfish. Anyway I'm talking about Heyday because of those recent Scott Walker posts. It is an impeccably produced record with great songs and arrangements. It was Scott walker's main man Peter Walsh at the desk. This is the sound of 80s Australia in the best possible sense. I could bang on about the coolest sounding lyrics ever, the dual guitar interplay of Koppes and Wilson-Piper and the wonderfully intuitive drumming of Ploog. Also saying Ploog is great. Richard Ploog the coolest rock drummer ever! Anyway you've probably heard all that before what I want to highlight is the production and arrangements and how well Walsh and the Church got it so so right.

Youth Worshipper
Horns and strings by SK alone this time. Some really weird and unexpected changes in this track. It starts off all nice and jangley then goes down some strange paths. Those horns are so fucking cool the whole thing still amazes me to this day. A high water mark in a career already filled with peaks. These are two of my favourite tunes from this classic album. I wonder why The Church never worked with Peter Walsh again? It's not like the results weren't outstanding or anything. 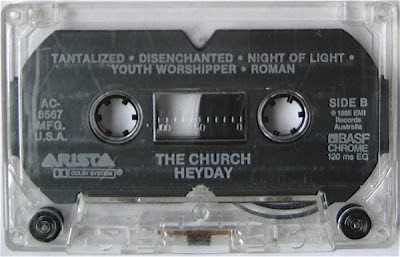