I don't really know what prompted me to finally pull this off the shelf and start reading it. Perhaps I was in need of a dose of punk after reading about dinosaurs Led Zeppelin. I must confess I'm not really into rock Biographies. I think the only two I got through ever were the Mike Barnes Beefheart book and Heroes & Villains: The True Story Of The Beach Boys by Steven Gaines like 17 years ago. The Gaines book particularly shitted me because I don't even think he liked their music. I got halfway through Patti Smith's book Just Kids and hey that was beautifully written..... I guess I'm more into music analysis, cultural theory and its impact in relation to sociology. All my friends tell me to read you know the bio on Neil Young, Motley Crue, Keef, James Freud, various Guns & Roses folk etc. etc. I'm more into documentaries like the Classic Albums series one on The Mac's Rumours, 30 Century Man on Scott Walker, Made In Sheffield: The Birth of Electronic Pop,  End of The Century on The Ramones, It's A Long Way To The Top, the 6 part ABC series on the history of Australian Rock and The Story Of Anvil. I even avoid most of those. I never watched the one on The Pixies or The Minutemen. Mainly I like it when the focus is on the music not the gossip or the hangers on/groupies/business people. I like the mystery. I don't wanna know if Black Francis is a cunt or not.

Then there are the movies where they supposedly dramatise real life events of scenes and groups. I loathed 24 Hour Party People despite being a a massive Factory Records head with Peter Hook being one of my all time cult heroes. Even the great Steve Coogan couldn't save that shite. I've steered totally clear of Control, the movie based on Joy Division. I don't want these fake images in my head ruining what my imagination has come up with. After watching the Joan Jett movie I now picture Joan as the girl from Twilight. Ray Manzarek became Coop in a wig once I'd watched Oliver Stone's The Doors. IE. Kyle Maclachlan who was currently playing Agent Cooper in the Twin Peaks tv series put on an absurd wig and came across as nothing like the Manzarek we encounter more often than you might think.

Anyway I'd thought I'd get about 30 pages into Lexicon Devil and then give up. About 15 years ago someone made me a copy of The Germs GI record and I was massively surprised that they weren't total shite. I was never big on X and about 94% of the LA hardcore that followed in The Germs Wake. The only other thing from that era in LA that I liked was The Screamers who had this mental bootleg around that same time (as when I got GI) called In A Better World. As far as US proto-punk/punk/post-punk was concerned Detroit, San Fransisco, New York and Ohio were where it was at.

I pretty much knew nothing about this LA scene except for some of the main bands music - The aforementioned X and The Screamers as well as The Weirdos, The Urinals & The Go Gos. From the get go this book had me hooked. It was written oral history stylee. The stories of Darby's fucked up LA alternative schooling were totally bizarre. This was the 70s, this was LA, this was very experimental schooling and education. These school experiences along with Darby's studies of Scientology and brainwashing informed the rest of his short life. Who knew he was a budding cult leader in the making? So there were lots of drugs, booze, squalor, violence and oh yeah punk rock! Mainly though most of the people/hangers on/groupies in this book were total fucking arseholes. Lexicon Devil is an expose on repression, perversion, violence, manipulation, murder, mental Illness, depravity, suicide and wasted youth.

There isn't much talk about the importance (for want of a better term) or the cultural affect of some of the seminal records being released by bands included in this scene and book. As you can probably guess by it's title Darby's life begins to escalate into a drug and alcohol fuelled mess and finally tragedy. Legendary rock writer Richard Meltzer was quoted thus "Lexicon Devil is pure and Simple, the finest volume on punk to see the light of print."

What's missing though is the fact that The Germs Forming 7" is one of the greatest debut singles by any band ever (in all its lo-fi glory) and their GI LP is a fine record that still stands up to this day. Maybe it's even still influential today? Hello UV Race. You could do worse than having The Germs as an Influence.

**Further listening Black Hole: California Punk 1977-80 released in 2010 on Domino.
**This features all the previously mentioned groups plus The Dils, Black Randy & The Metro Squad and The Flesh Eaters. There's even some bands from San Fran like Crime, The Dead Kennedys and The Sleepers. 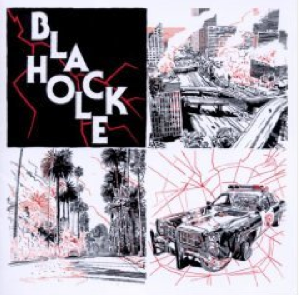