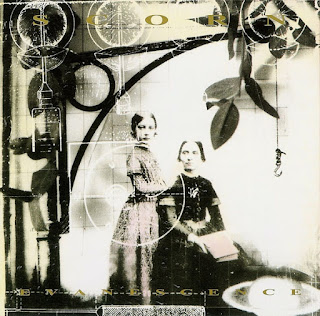 Someone once niftily described Evanescence as Metal Box meets Bernard Hermann. That's way too neat a summation of the panoply of sonic experiences contained within this cd though. Evanescence was an incredible solitary sonic document of what musicians were attempting within these musical spheres at the time. Sure there is deep dub bass and spooky horror motifs but a whole lot more was going on here. While other UK Post-Rock groops like Stereolab, Pram and Laika were influenced by the great fluid Krautrock beats of Neu and Can, Scorn's beats were informed by hip hop. Along with darker ambient vibes they had traces of metal (Mick Harris & Nick Bullen were ex-members of the ferocious and funny metal band Napalm Death), goth, post punk, industrial, techno and drone-ology. The grooves are infectious and even sometimes mellifluous. Getting lost amongst these deep and heavy riddims is all part of the attraction of Evanescence. I recall being rather confounded upon first hearing this LP due to its musical juxtapositions and I guess, what I saw as contradictions, but that didn't last long as I kept coming back for more. The occasional vestige of a riff even drifts in now and then. Dread was a major part of original 70s dub reggae and on this recording Scorn certainly captured a unique British gloom. A doomed feel permeates the entire record. Unlike other ambient dub acts of the time this was not good time E-head chill out music. It had mysterious lulls into nightmarish worlds containing all the colours of the dark. Scorn at this stage were like a lethargic cousin to UK's darkside hardcore scene and a precursor to future genres like dub-step and hauntology. On Dreamspace Scorn even give us a bit of bass drum girth gabba/gloomcore style, which is fucking wicked. Exodus, one of the stand out tracks, was like a forlorn My Bloody Valentine with an ominous didgeridoo instead of an ecstatic flute. The lost generation of original UK post-rock were trying to push things forward and this LP stands as a testament to that vision to this day. It was quite an achievement and I kinda can't understand why a hundred groups didn't take up this as a blueprint but I guess the future was still up for grabs at the time and bands were forging their own identities, not wanting to be mere Scorn acolytes. The copyists and clones were gathering together over near or in the charts under the banner of New Wave of New Wave and Brit-Pop, nowhere near these outer regions.

Scorn's Evanescence is magic from the margins.
Posted by Tim 'Space Debris' at 00:28 No comments:

I couldn't help but have a little chuckle to myself when I read an article at FACT on "Power Ambient". This is some kind of re-branding so the writers don't seem recalcitrant. Terms like New Kosmische, Nu New Age, Hypnagogia,Vapour Wave and even good ole Ambient have obviously become embarrassing and passe for these writers. So Motion Sickness Of Time Travel get a second bite of the cherry under a new genre pseudonym "Power Ambient". Hey I've always liked em no matter what category they've been put in. What about one of my other ambient favourites Panabrite, do they get to be rehabilitated? They released another excellent LP this year Pavilion, or do they remain in the backwaters of passe pigeon holes?

This is taken from Panabrite's 2014 album Pavilion.