Original - Leftfield (1995)
There's been a bit of chatter over at Energy Flash about the cross pollination of shoegaze, ambient and techno in the 90s and beyond due to the imminent reissue of the self-titled LP from The Primitive Painter. They were a German duo I'd never heard of until a fortnight ago. Their one and only LP was released in 1994. They had a love for house and 80s indie-pop and noise-pop. Anyway Simon posted a bunch of "SHOEGAZETRONICA" the other day including a FSOL remix of Curve. It put me in mind of the above track which features vocals from Curve's Toni Halliday. I loved it at the time but it's not as exciting as I remember. In fact it kinda feels as dull as say Groove Armada. Am I right?

The Primitive Painter were duo Roman Flügel and Jörn Elling Wuttke better known as their techno aliases Acid Jesus then they became the chartbusting Alter Ego from 94 onwards. The Primitive Painter LP was somewhere in-between. This album got lost in the 90s glut but has gone on to become a cult record. Original copies (only 500 pressed) now go for crazy money on the internet and I can see why, that above tune Hope is exquisite. 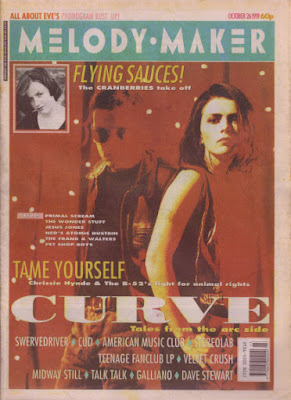 Anyway I ended up writing a whole thing on Curve over at Energy Flash which is funny considering I only ever had their first three EPs. I do however find failed major label pop stars who then change their style in a second, third or fourth chance at success/fame fascinating. I've touched on this before but whatever. People I can think of who fit in this category off the top of my head are Guy Chadwick, Matthew Sweet, Alanis Morissette, Robin Thicke and of course the two ladies mentioned below Toni Halliday and Shirley Manson. There must be stacks more people in this category though. Some groups who went on to be glam bands had second chances. Mud were a psych-pop band originally and Sweet were maybe some kinda pub blues band. Once in the hands of the right songwriters and/or producers these musicians get reinvented. A book on this kind of thing would be fascinating. Below is what I wrote in Simon's comments box. 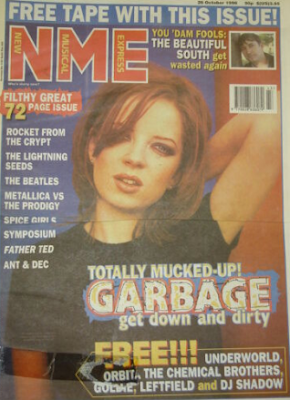 The mark Curve have left on music history is via who they influenced ie. Garbage who sometimes sound uncannily like Curve except Garbage were million selling alt-pop titans. Both groups though were kind of phoney manufactured groups chasing alternative trends (nothing wrong with that The Sex Pistols were a boy band). Other parallels include second chances for both front women, well actually for Shirley Manson it was her third bite of the cherry. She had been in 80s/90s band Goodbye Mr McKenzie then Angelfish who were a record company manufactured vehicle for Manson. One of the Garbage dudes saw her on MTV and that was that.

Toni Halliday had several bites of the cherry too. She was in group State Of Play with members of Eurythmics live band. They did an LP in 1986 which nobody cared for. More Eurythmics connections continue here as Toni was then signed to Dave Stewart's label (Anxious Records) for a solo LP that failed to make an impact on anybody despite engineering and production from Flood and Alan Moulder. Toni then formed Curve with State Of Play/Eurythmics bass player Dean Garcia and their wild card was Alan Moulder on production, mixing, engineering and sometimes guitar duties. Curve were also signed to Anxious Records during their most successful period 1991 to 1993 where they did catch some chart action in the UK. They had 5 UK top 40 singles and the first two LPs went to 11 & 23 respectively.

Coast Is Clear - Curve (1991)
I do however recall thinking their 2nd single Coast Is Clear was undeniable despite how derivative/generic it was ie. Nirvana's Smells like Teen Spirit. You can hear where Garbage took some inspiration with regard to melody, gloomy vocal tone & petulant lyrical content right here. I've enjoyed listening to this one again.

Frozen - Curve (1991)
er...another one cut from the same cloth. I quite like this one too. I must admit I never followed them past the initial run of EPs and I guess The Frozen EP is their peak. EPs were where it was at for shoegazers. Imagine if Slowdive's Just For A Day or Ride's Nowhere where cut down to just the four or five essential tunes that hadn't appeared on any previous releases?


Want More Need Less - Curve (2001)
Didn't know about this one until today. Kevin Shields plays on two tracks on Curve's 2001 comeback LP Gift. If you took the vocals off this, it would sound like a Loveless (1991) outtake. Perhaps it should have been titled "Want Less Need Less". This might have been a strange experience for Shields as Curve had cribbed most of their ideas from him or maybe he was just flattered. Flattery gets you everywhere. Toni Halliday is married to legendary Glider/Tremelo/Loveless engineer Alan Moulder so I guess they would have probably all known each other.

Vow - Garbage (1995)
I fucking loved this when it first came out. It still sounds damn fine. I always thought this was somewhere between peak psych Beatles (Tomorrow Never Knows/I Am The Walrus), MBV via Curve with classic grungy riffage, pop hooks and production. They never topped this did they?

Shoegazetronica Began Here Part I.
Instrumental B - My Bloody Valentine (1988)
The near mythical tune that came free on a 7" with the initial pressings of the vinyl version of Isn't Anything (1988). I bought the cd so I thought I'd missed this forever until that great compilation EPs 1988-91 surfaced in 2012. That breakbeat mixed with Kevin Sheilds' eerie fx make this track so much more as it also predates Aphex Twin, Seefeel, Boards Of Canada, Hauntology etc.


Shoegazetronica Began Here Part II.
Blue Bell Knoll - Cocteau Twins (1988)
From the 2 minute 20 mark to the end of the opening title track of the Blue Bell Knoll LP The Cocteau Twins set down a template for funky drumming amongst gusts of guitar bliss. This slice of music of just over a minute is a concise blueprint for what was to become shoegaze and a jump off point for Shoegazetronica. Other tracks and sections of tunes on Blue Bell Knoll reiterate this vibe especially Carolyn's Fingers & A Kissed Out Red Floatboat.

Shoegazetronica Began Here Part III.
A Love From Outer Space - AR Kane (1989)
This just opened up a whole other expansive universe of sound along with several other tunes from the LP "I" (1989). You can hear the seedling of Saint Etienne here. In the youtube comments of the video clip version somebody calls it R&Bgaze.

Spirea Rising - Spirea X (1991)
Anyone remember this? I thought they were gonna be great and push the boat out on the whole rhythmic dubby shoegaze thing but it turned out this was the only half decent tune they did. I still really like this particularly that bass. An LP of tunes in this style would have been awesome. We had to wait a year or two for Seefeel then a year or two more for Bowery Electric's Beat LP.

Semtex - Third Eye Foundation (1996)
Then there was this guy Matt Elliot who took it all to a less idyllic place although there is some kind of bliss in its nihilistic abyss.

Sleep - Third Eye Foundation (1996)
The stories were circling in the mid 90s that Kevin Shields was making a jungle inspired My Bloody Valentine record but Third Eye Foundation beat him to the punch. This is still quite a rush and a blueprint for a genre that never happened.

Untitled/Get Out #3 - Pita (1999)
Does this track somehow fit amongst the whole shoegazetronica? For me it does! Untitled #3 from Pita's Get Out album is kind of like a Slowdive instrumental put through a virus ridden laptop. This is like a distant cousin to My Bloody Valentine's To Here Knows When. It's all about the euphoric amorphous noise and the spires of splintering sound reaching for the heavens. Rejoice in this crackin track. [Added Entry 16/5/20]

Soon - My Bloody Valentine (1990)
For reference's sake here's a little tune that was slightly innovative and influential.
Posted by Tim 'Space Debris' at 13:19