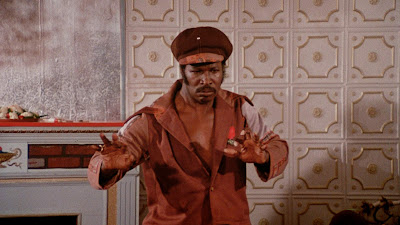 The Human Tornado (1976)
If you loved Dolemite (1975) you are gonna love this because it's more of the same but improved by 150 percent and at least 50 percent more bonkers. They've also upped the sleaze quota. The kung fu choreography is even not too bad plus they discovered sound effects which makes it extra outstanding. Rudy Ray Moore once again serves up his proto-rap boasts and toasts throughout. At the opening of the movie we get a taste of Rudy's blue standup routine with many a fat and dick joke. The trouble begins in Alabama where the white honky police are none to pleased with some black people having a good time. It also turns out the racist sheriff's wife is paying Dolemite to service her in the sexual department. Uh-oh, now Dolemite and his brothers are on the run, Dolemite does some impressive stunts in the nude then they highjack a swishy white guys car and head for California. The sheriff and his cronies are in hot pursuit. That's just for starters. In California Queen Bee played by the incomparable Lady Reed is in trouble so it's DOLEMITE TO THE RESCUE. There's kidnapping, torture, mafia, mucho kung fu action, shoot outs, nude exercising, another great funk/soul/jazz soundtrack, crazy house collapsing sex and Dolemite even beats the world nunchaku champion with his funky karate. On a technical level we even get some very cool jump cuts, action replays and reverse footage of some of the ridiculous stunts. Most of the kung fu and car chase action is sped up to insane levels. This is a whole lot of silly and the world is better for it. There should be more people like Rudy Ray Moore. 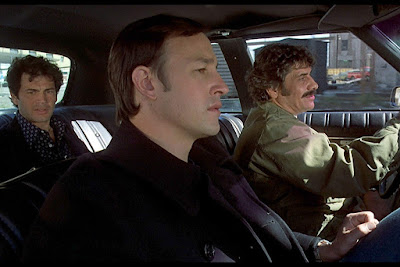 The Don Is Dead (1973)
Richard Fleischer doesn't make bad movies he just takes his time and doesn't seem to give a fuck. I guess at this stage he was heading into his twilight with only one true masterpiece to come after this in the following year's Mr Majestik (1974). The Don Is Dead is a good lil mafia story which is pretty slow and talky in the first half but the action and violence pick up in the second half. Frank (Robert Forster) gets his grass cut by the Don (Anthony Quinn) while he's away on an  overseas trip. When Frank returns home he is tipped off that his woman Ruby (Angel Tomkins) has done the dirty and a rift between the mob families follows. For mafia movie completists and Robert Forster fans. 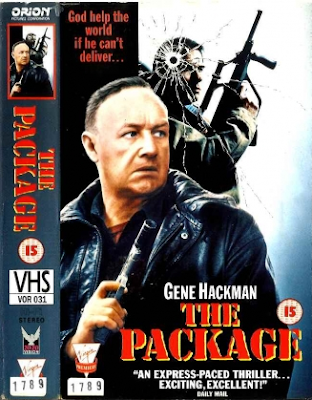 The Package (1989)
Remember Sunday nights in the late 80s and 90s. That was movie night and the networks would battle it out with a first release movie every week. Sometimes you'd watch stuff that you would never pay a cinema ticket for like political thrillers, action thrillers, sexy thrillers, legal thrillers etc. and they would be fine entertainment. These movies were a dime a dozen and at least one if not three were on your telly every Sunday night. The Package is that kind of movie but it's in the top echelon of the the political thriller sub-genre. This is a really captivating film with plenty of political intrigue, bombers, false identities, cold war conspiracies, snipers, double crossing, clandestine military activities, a patsy, good cops, bad cops, assassins etc. We even get a Mikhail Gorbachev and George Bush Senior lookalikies. All the intrigue keeps you on the edge of your seat right up until the finale. The Package doesn't miss a beat. It stars Gene Hackman (of course), Tommy Lee Jones (of course), John Heard, Joanna Cassidy, Pam Grier, Denis Franz etc. who are all on top of their game. Most people have probably forgotten this flick but it's well worth un-forgetting. 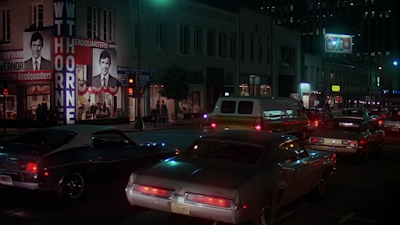 The Big Fix (1978)
This was about to get switched off as I was finding Richard Dreyfuss just too fucking irritating. At one point Moses Wine (Richard Dreyfuss) is called a dick by his ex-girlfriend Lila (Susan Anspach) which had a double meaning, one that he was a private detective and two that he was an annoying turd. Some have called this a comedy but I wasn't getting any laughs. I prefer to see it as a neo-noir/political-thriller kind of thing. Anyway somewhere near the halfway point the tone changed from obnoxious whimsy to pretty much hardboiled so I was able to stay for the duration. The capricious tonal change wasn't just in the mood and acting, the score all of a sudden dropped the light vaudeville vibe to the sounds of crime funk. In the end The Big Fix was a good little story and I was just able to forgive the aggravating scenes from early on. It's also pretty hard to get past the sometimes misty eyed nostalgia for extreme left 60s politics. There also seems to be some kind over correcting going on here as people who once supported terrorism are now trying to stop terrorism. Moses gets a case to track down the culprit of a public smear campaign against Californian governor candidate Miles Hawthorne. The investigation uncovers an entire political conspiracy that goes all the way back to the mid 60s and includes campus radicalism, murders, framing, planned terrorist attacks and a whole lot more. John Lithgow with fantastic hair and beard is brilliant as Sam Hawthorne's campaign co-ordinator. This film had some potential as the story is very compelling but its chances were ruined because a lot of the stuff in the script sucked along with the casting of Dreyfuss who also sucked. 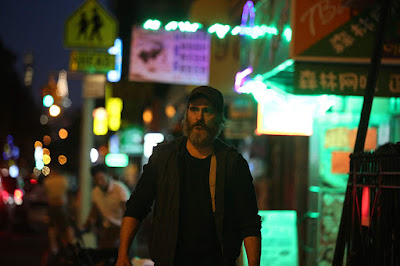 You Were Never Really Here (2017)
Unusual neo-noir-crime-thriller. Joe (Joaquin Phoenix) is a haunted veteran whose job is finding missing girls by any means necessary and returning them to their homes. His latest job is to rescue Nina (Ekaterina Samsonov), a senator's daughter from an underage brothel. This is no easy task and things go haywire. A trail of bodies eventually leads us to the end. This is on the artier side of the revenge movie spectrum so it's not going to be for everyone but it's pretty bloody good. Joaquin Phoenix is once again at a rarefied level of acting and is a pleasure to watch. Now that Philip Seymour Hoffman is dead and Daniel Day Lewis is retired the contender for the crown is here and I'll back him all the way!

Funhouse (1981)
I thought I'd probably seen this but couldn't remember and maybe I have I just can't remember. This captures to perfection the creepy atmosphere of a run down carnival with its crappy, sleazy, tired and ominous sideshows. A special mention must go to the distinguished cinematography of Andrew Laszio. The only problem is after the wonderfully squalid vibe has been set in the first half of the film the rest of the movie flounders. Tension just isn't built properly with pacing that's all over the shop. There's even a great monster who is just wasted, he could have had so much more of an impact. There is a problem with beats in the script, the editing is not up to scratch and the soundtrack is not compatible with the visuals. Four older teenagers perhaps in their twenties attend this seedy travelling carnival looking for a laugh. They dare themselves to stay overnight in The Funhouse which is a knackered old ghost train. The slasher then begins as the youths are stalked by a murderous deformity and his dad. We get murder and mayhem but very little excitement or emotional investment in anybody who's being being chased down except for the main protagonist Amy (Elizabeth Berridge). We want Amy to survive but that's not enough to save this flick. Elizabeth Berridge and most of the actors who play the carny folk are on point however. The Funhouse is ok but it just doesn't quite deliver on its promise. Worth a look though if you're a horror enthusiast or a slasher completist. Some horror fanatics wish this was better than it is, so they rate it but they know it's no Texas Chainsaw Massacre, Halloween or Friday The 13th Part II. 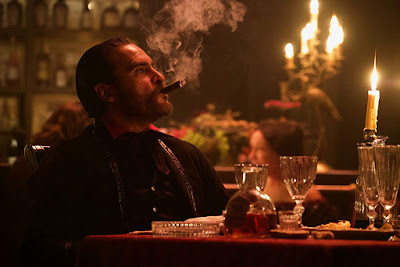 The Sisters Brothers (2018)
I'm definitely on a Joaquin Phoenix kick ever since I watched his brilliant performance in Inherent Vice (2014). Here he gets to play alongside another actor who can scale similar acting heights in John C Reilly. This duo play a couple of ruthless assassins Eli (Reilly) and Charlie (Phoenix). They are brothers with the surname Sisters. This is a western set in the north-west during the mid 19th century. The Sisters brothers are on the hunt for Herman Kermit Warm (Riz Ahmed) under the employment of a wealthy bloke by the name of The Commodore (Rutger Hauer). After HBO's Deadwood (2004 - 2006) you would think that you would never be able to call another western weird but I gotta say this is pretty fucking strange. We do get the usual western motifs of hard drinking, gunsling violence, allegiance switching, prostitutes, cowboys tired of the frontier life, gold digging and horseys. Then there are the odd moments like the bizarre chemical formula to find gold, Eli's almost deadly encounter with a spider which he swallowed whilst sleeping, unusual dialogue and subject matter, idealogical mumbo jumbo, the introduction of teeth brushing, nocturnal bear attacks on the horseys and uncommon sensitivity amongst the machismo. Don't let that put you off though it's still a pretty good western where much havoc is wreaked. Oh and Jake Gyllenhaal. 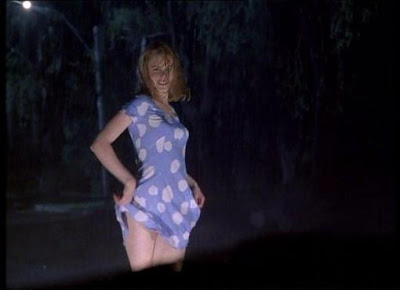 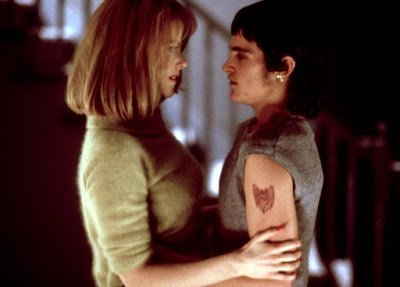 To Die For (1995)
Two movies in one plus theres another movie within this movie. Don't worry thanks to great editing and directing this is not confusing one bit. In fact it feels like a really straight forward film. This was Nicole Kidman's game changing role. This was also Joaquin Phoenix's comeback after he had retired from being a child actor and what a great performance to bring him back to prominence. I hadn't seen this since it was first in cinemas when I called it an instant classic. At the time It really felt like a fresh satire and commentary on telly and fame now it just appears to be normal reality. It's still good though and works well as a neo-noir. A cunning yet sometimes thick regional TV weather woman Suzanne (Kidman) wants fame at any cost needless to say she is a femme fatale who to leaves a trail of devastation behind her.  The scary thing is this is loosely based on a true story. 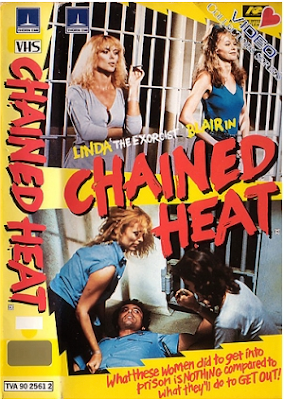 Rocketman (2019)
Fuck celebrity biopics! I will never watch another one. If you like yourself some Elton just go and listen to your favourite Elton John record or watch an Elton concert dvd instead of wasting your time on this absolutely tedious bullshit! Musicians are really good at making music. Film-makers are really bad at making films about musicians. That's all I've got to say.