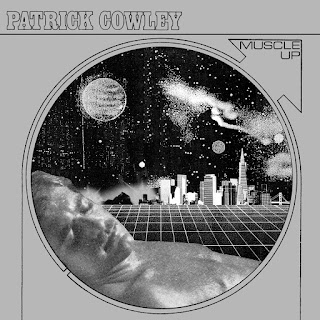 I was very pleased to see this new release of old stuff. Patrick Cowley's 2013 archival record School Daze was terrific and this one is even better. This is more archival material from the 70s and early 80s. Some of these tunes were used in porn films. How lucky were these film makers who got to use Cowley's compositions in their pornos? I'm pretty sure if Cowley had lived beyond 1982 he would have become a renowned soundtrack composer. Cats Eye opens Muscle Up by setting a strange futuristic tribal atmosphere with haunting piano and very big and ominously slow drums. The Jungle Dream is an incredibly expansive and humid piece of ambience. It comes complete with jungle sounds and a faintly menacing vibe that something is occurring off in the distance. Conjuring thoughts of danger as there maybe some kind of sacrifice ritual taking place behind that next set of trees. Deep Inside You could be a Michael Rother/Neu outtake with its damn fine treated guitar and krautrock pulsations. Somebody To Love Tonight is neon lit night time synth dub for seedy city streets. Pigfoot is a glorious synth jam with classic funky guitar licks. 5th of Funk is some more mental synth funk/cosmic disco action. Don't Ask is a restrained cop show stakeout tune set in a future urban metropolis perhaps what Cowley imagined San Francisco might have been like in 2017, I mean he died over 30 years ago so... By the time we get to Uhura he's getting really out there into the cosmos. Timelink is Berlin School electronics with a didgeridoo which places the outback amongst the infinite stars, incredible stuff. Mockingbird Dream is a sprawling hallucinatory journey that slowly goofs off behind some unknown planet. Best archival release of 2015.
Posted by Tim 'Space Debris' at 01:45

Email ThisBlogThis!Share to TwitterShare to FacebookShare to Pinterest
Labels: Muscle Up, Patrick Cowley