I thought we'd have a little Church trip with some of their most epic tunes through the ages. This is from the first record Of Skins & Heart (1981). I suppose then this is their first epic. I still love a very lot (sic).


I've never seen this video in my life. Anyway this is the biggest epic on their epic laden 2nd LP The Blurred Crusade (1982). Still a live killer to this day.

This is from the 3rd LP Seance (1983) and would be their most experimental tune up to that point in time. Still very fucking cool


Trance Ending was actually a b-side to Columbus a single off Heyday (1985). Great middle eastern trip out. Nice.


One of the great things about The Church was their album opening tracks and this is one of their greatest. You have to keep in mind these guys were on major labels throughout the 80s and they really didn't give a fuck about trends. They had top 40 singles in Australia and America so that was a problem for Indie people but The Church were also doing their own thing alienating them most of the time from the mainstream. They really didn't fit anywhere making them true cult outsiders. They also inspired a legion of groups who were obviously enamoured by their talent and artistic vision not to mention their fashion sense. You could never recreate that unique synergy though and those acolytes must have soon realised being as effortlessly cool as The Church wasn't quite as easy as they made it look. Starfish (1988) was their 5th classic in a row and their most popular and successful LP of their career. It even went gold in the US.


Let's forget about album number 6 shall we, Seve Kilbey's been trying to ever since 1990. Here's another great opening tune this time to their 7th album Priest=Aura from 1992. Kilbey claims this LP to be the true follow up to Starfish. If it had been perhaps they would have been as big as their contemporary The Cure, in The USA at least. America is still their bread and butter though as well as Australia. Having said that they were quite a cult band throughout pockets of Europe during the 80s and remain so to this day. Funnily enough I think after Johnny Marr and Stephen Patrick Morrissey had a meeting and decided to form The Smiths they went out that night to a Church concert. I reckon you can tell Marr must have loved their guitars and was influenced by them. Priest=Aura was probably their last consistently excellent LP until 98's Hologram Of Baal and their recent classic Untitled #23 (2009).

With this opening 1994's Sometime, Anywhere I thought we were in for an absolute killer album. The LP was ok but contained a couple of naff tunes and was perhaps a little long. It did have many other excellent songs though but this is the most memorable one for me.

Another choice LP opener this time for their 9th album Magician Among The Spirits from 1996. Jesus I've forgotten how good this is, must dig out the cd. Surely this is the only place to you'll hear Jeff Kennett, Ida Lupino and Milli Vanilli mentioned in the same song. I always thought Kilbey said Alan Moulder (the legendary engineer/producer of JAMC, MBV, The Boo Radleys etc.) at the end of this tune but disappointingly the youtube uploader reckons it's Alan Muller* whoever he is? This is a phenomenal trippy spaced out improv (shhh!) psych jam. Steve's answer to Madonna's Vogue, doncha reckon? 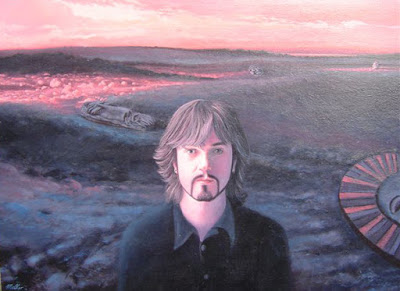 *Uh huh, Alan Muller painted this! Great painting of SK. He must have painted the cover for SK's 4th solo LP Remindlessness (1990) as well. Actually looking at them together now it's the same picture just zoomed in, I think, maybe....