How fucking cool is This? 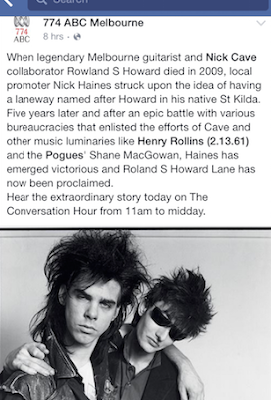 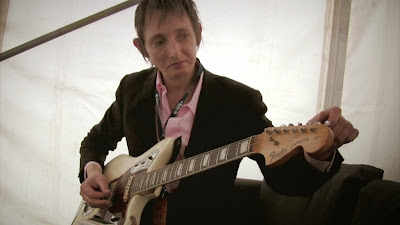 Yep that's right legendary guitarist of the Birthday Party and later fabulous solo singer/songwriter and guitarist is getting a Laneway named in his honour in St Kilda, Melbourne. St Kilda is of course where The Birthday Party played and lived before moving to the UK. It's the only suburb where I ever saw him. He was in the supermarket in Acland St with potato salad in hand looking gaunt and ill as he always did but cool at the same time. My old town of 25 years Melbourne also had an AC/DC Lane which I always thought was pretty cool. Moving to the Desert City on the Murray I had plans myself to try and get a street or maybe just my back lane named after the fabulous Mildinga band The Creatures. The Creatures are famous for the song Ugly Thing which the US garage rock magazine Ugly Things was named after. A fabulous chapter on the groop can be found in Wild About You: The 60s Beat Explosion In Australia & New Zealand written by Ian & Iain. Raven Records also released 4 volumes in a series of compilations called Ugly Things in the 80s. The first and best volume contains the tune in question. My plans are back on the drawing board after this inspiring precedent for Rowland's lane. Funnily enough RSH probably used to shoot up heroin in that lane or at least one nearby.


ROWLAND S HOWARD - POP CRIMES
Rowland’s final album, issued in 2009 just two months prior to his untimely death. He was only 50. His career was experiencing a resurgence and Pop Crimes was a brilliant album that was critically acclaimed. He continued his great reinterpretations of other people’s songs here which include a phenomenal brooding version of Talk Talk’s Life What You Make It and Townes Van Zandt’s Nothin. The opening tune I Know A Girl Called Jonny is a remarkable duet with Jonnine Standish (HTRK) that contains possibly the best line in pop ever - ‘Pashing with the devil at the bus stop’. Pop Crimes is gloomy pop trash at its finest, quite possibly Howard’s finest hour.

ROWLAND S HOWARD - TEENAGE SNUFF FILM
The best Australian rock album of the 90s hands down. Rowland makes an incredible comeback. He gets Mick Harvey to play drums (so economical) and Brian Hooper to play bass (some of the coolest bass playing ever). Trashy pop tunes, hatefully cathartic dirges, doomed love songs and a Billy Idol cover version all add up to one hell of resurgence. Chuck in some great string arrangements, Rowland's best ever vocal performances as well as his blistering guitar work and hey you got a masterpiece on your hands.

**These two blurb reviews on Howard will be appearing at the HC website soon.
Posted by Tim 'Space Debris' at 23:05