After last year's reissue of The Sunnyboys debut self-titled LP which was expanded with an entire disc of demos comes their 1982 follow up Individuals. This is not a reissue of the record that Mushroom released in 1982 though. These are actually the original mixes from NZ that the band were very happy with and thought, with a bit of slight adjustment, would be issued as their second LP. That didn't happen. Like the first record this was produced by Australian rock legend Lobby Loyde of Purple Hearts & Coloured Balls fame and strangely recorded in New Zealand, then mixed in LA? So my understanding is that these versions, presented here for the first time, are pre Lobby running off to LA with the tapes, probably at the request of Mushroom head honcho Michael Gudinski. I guess that reasoning would have been to keep the band far from the product Mushroom were trying to mould to make the most money for Mushroom ie. not respecting the artists one iota. When I saw the 2013 documentary The Sunny Boy on Jeremy Oxley's life he kept saying his music was taken away from him. I assumed he was talking about the 3rd rather shite (unlistenable as I recall) Sunnyboys LP Get Some Fun but no this 'LA debacle' must have been what he was talking about.

While many rate their first album as their best, I think Individuals is my favorite. I spent a lot of time in the early to mid to late 80s with this record. This LP is perhaps a bit darker than the first but it has always stuck with me. Throughout the 90s I had one side of a C-90 with Individuals on it which was taped on my dad's 80s Marantz Hi-Fi from the original vinyl. My older brother Patrick brought this classic into my life. As I've mentioned before on this blog Sydney was the place to be for rock in the mid/late 70s through the entire 80s pretty much. Music was everywhere and there were legions of great bands giving it their best shot. If you didn't like a band it didn't matter there was another one playing in the pub on the next corner that you'd probably like. Feel Presents Pty Ltd have changed the original Mushroom Records track listing slightly, probably to reflect the original vision of what Individuals should have been. This Is Real has been moved from the opening track to the last which makes perfect sense. Pain originally the b-side to the This Is Real 7" has been added as the second last track. a new cover has been created too, which I guess is fair enough as this is kind of a new product. I'd say Peter Oxley designed it. He used to do all their ace posters and stuff. I'm really quite fond of it, surprisingly, as I usually hate it when they change covers, see reissues by the The Go-Betweens and Dave Graney's Coral Snakes. That 1982 Individuals record cover was an iconic gatefold affair which was integral, I thought though, to the entire package. This gatefold captivated me like no other during my adolescence.

Then there were the tunes in a post-punk power-pop vein but they were much more than that label could ever do them justice. Man what tunes they were. One wonders whether The Sunnyboys music could have ever translated outside of Australia, it should have as it was a great lively breath of fresh air and paradoxically timeless and of its time. The Sunnyboys were blessed with incredible pop smarts that were performed by one hell of an exciting unit. There was something quintessentially Australian about this band though. This music could only have come out of Sydney. If music as specific as Dunedin's (NZ) 80s guitar pop can be so revered worldwide, I can't see why this can't. I guess it was kind of mod pop into psych informed by the likes of 70s Aussie legends like Radio Birdman. As previously noted, elsewhere, singer, songwriter and guitarist Jeremy Oxley despite being quite sporty and even a champion surfer as a teen was quite a troubled guy. He was only 19, I think, when Individuals was recorded. His lyrics were mature way beyond his years and delved into his confused world. Like Ian Curtis, Jeremy Oxley placed serious lyrical content amongst exhilarating songs creating a weird but defiant juxtaposition. Like on I'm Not Satisfied, one of the most boisterous and upbeat songs here, the lyrics are about self hate and frustration but you want to sing that tune with joyous abandon. That's the Sunnyboys spirit and the secret to their magic. They're never sooky, I wouldn't be writing about them if they were. 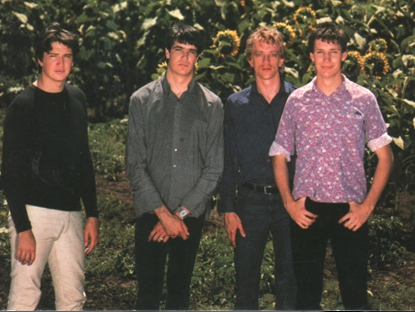 On re-listening to Individuals (well sort of) it's a lot more subdued and experimental, compared to the 1981 debut, than I remember but its still full of rockin youthful exuberance. What is striking though is the spectacular tunefulness and idiosyncratic lyric delivery...er.... that's singing from Jeremy. Jeremy is so charismatic its breathtaking. Sometimes I just can't believe the inventive melodies he came up with. Then we've got the backing vocals which are fucking great and crucial to this LP's classic status, they're beautifully arranged. The superlative guitar playing was the best thing to come out of Australia since Deniz Tek and, funnily enough their producer, Lobby Loyde (who obviously had a great ear for these things and must have seen Jeremy Oxley as some kind of successor).

The title tune which now opens the record remains a classic universal tale of urban alienation of not fitting in where you're not from and other lonely individuals who might be the same. It's also a sledge against those so eager to fit in. Sunny Day is so good, so Sydney, such cool backing vocals, one of the best tunes on the record and should have been a number 1 smash! Interestingly I've heard the band refer to this as a hippie song but I'm pretty sure its about drinking and violence amongst other things. Leaf On a Tree is an anomaly in the band's oeuvre. I guess it always reminded me of a Ringo Starr tune from say the White Album. This is the only explicit reference to an influence that I can ever recall on any Sunnyboys tune. Back then bands weren't so reverential or record collection rock. Groups had the capacity to come up with their own sound and it was inherent that things got pushed forward. You Need A friend is a garage-psych-pop number about not being able to conform thus making it hard to make friends. Jeremy Oxley was many years later diagnosed with schizophrenia so this confused, frustrating tale is palpable. I have a minor quibble here, one of my favorite musical passages of the Mushroom version of this song was the spooky fade back in where Jeremy sounds like an alien who needs a friend but doesn't have the capability to get one, this sadly is not part of the version included here. That used to scare the shit out of me as a child. I think I was 11 when I first heard this LP. No Love Around is so melodic and rockin, I'm left mesmerised and dazzled! Oh yeah they had excellent explosive guitar bits that were awesome. I never knew who was playing which part, whether it was Peter Burgman or Jeremy Oxley doing the cool sections, but who cares? In Colour of Love there's another amazingly unhinged guitar break that just pops outside of your speakers (way, way fucking better than the Mushroom version). This is one of their coolest songs that's got kind of a funky bass (Jeremy's older bro Peter Oxley on bass), with this weird reverbed guitar twang that's tantalisingly serpentine plus really delightful cavernous tom tom fills and then Jeremy Oxley inundates you with his glorious melodies that go unexpected places.

It's easy to read into Oxley's lyrics in hindsight and they feel way more heartbreaking now because he didn't know what the fuck was going on. Back then though you just thought of it as melancholy universal trials of youth that we all had to undergo before we found our place in the world. As youths we didn't realise some of us would never get to that place where we were led to believe we would one day belong. Time honoured themes of being lost, problems communicating, not having friends, lost love, social ineptitude and loneliness now take on extra poignancy here. Despite not knowing he was schizophrenic in 1982 he articulated his frustration, confusion and mental anguish unbelievably well. Let's face it, a songwriter extraordinaire he is, and his candid vulnerability makes him just that little bit more endearing.

Other noticeable differences from this alternative version include more prominent 12 string guitars, a warmer sound generally (not as thin), some weird percussive moments and rougher/better vocals from Jeremy. Individuals peaked at 23 on the national chart. The first single taken from the album You Need A Friend just scrapped into the top 40 reaching 38. This Is Real the following 7" remains a classic live Sunnyboys tune and here by the sounds it remains in its original Mushroom form (can't read the liner notes though to see if that's mentioned or not because the print is ridiculously miniature and my spex were eaten by a certain dog I own). I don't even think This Is Real made the national chart at all, that's fucking absurd! It should be an Australian anthem on a par with Cold Chisel's Khe Sahn.

The Sunnyboys Individuals: Once a near classic, now absolute classic. Totally recommended.