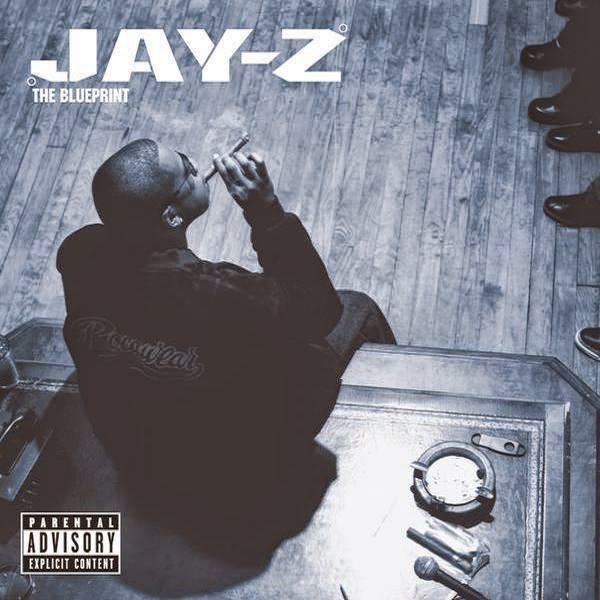 I don't really know when I became aware of Jay Z. I have a vague recollection around the late 90s early 00s of a dude who I thought was a dull, shite, clueless and overtly commercial rapper helping to hammer the nails into the coffin of hip hop. I thought he was partaking in a moribund culture. My thinking at the time was that hip hop had run it's course. It had gone fully commercial, ruled the charts and even had its own crap underground like rock 20 or more years earlier. I didn't realise I knew some of his tunes before I became fully aware of him when I saw the video to 99 Problems in 2004. This is when I thought shit maybe I'm wrong about this guy because this song is fucking great. I still didn't pursue his musical output though. I liked hearing him on the radio and seeing him on Video Hits and consider 2009's Empire State Of Mind, the tune he did with Alicia Keyes, as pop perfection. It gets me pumped every time! I only ended up listening to The Blueprint like 2 years ago when I'd realised rap was going through a little golden era. So, as with the previous post on Lil Wayne, I backtracked to see what I'd missed. Funnily enough I can't have thought the culture was fully dead as I have NERD's In Search Of and Missy Elliot's So Addictive that were released in 2001 as well. I still don't know if Z's previous 5 LPs are as soul based as The Blueprint. I guess I saw Z's style as a bit of a throwback after Timbaland and The Neptunes had taken rap and R&B interstellar. Having said that though he wasn't just doing a second or two of sampling then looping it like the old school. Many of the tunes here are wholesale appropriations of sweet soul tunes from the 70s. Kanye West uses some kind of studio trickery that really makes these tracks go pop and by that I mean Boom!. West produces 4 tracks here but this was before we knew his style. His debut album was still 3 years away.

The Blueprint starts out with The Ruler's Back which was the title of an 80s Slick Rick tune which Bink samples here but the main sample is Jackie Moore's beautiful post-Shaft tune if. This is infectiously triumphant and it's a hell of a way to start to an album. Z knew this was his time and he was taking it to the hilt, making the most of it. Holding up the trophy. This guy's so charismatic he makes saying 'uh uh uh' sound awesome. He raps 'I'm too sexy for jail like I'm Right Said Fred.' He's representing the hustlers like Rosa Parks, Malcolm X and Martin Luther King did before him. He's now on the throne. Then there's his pipes, he just has a great sounding voice and the flow of a champion. Takeover is a statement of intent. This is where Z takes over the rap game. His crew are 'runnin this rap shit!' He's the king, some kind of 'God MC, J Hova.....He'll 'kidnap your babies/spit at your lady/We kill you motherfucking ants with a sledgehammer!' He sledges Mobb Deep and calls Nas's career lame to David Bowie's Fame. Kanye samples The Doors Five To One that instantly makes you draw parallels between Z and Jim Morrision. Particularly how they both had/have penchants for narcissism and megalomania. Kanye isn't stupid he would have been well aware of what he was doing here. Morrison was regal too. He was The Lizard King. Izzo (H.O.V.A.) is another West production. This time it's The Jackson 5's turn to get sampled. It's hard not to like the pop smarts on show here. This is one I had heard in, like, the supermarket back in my Richmond days. Classic rap tropes here ie. Jay Z is claiming to be God. It's some kind of code referring to Z as Jehovah. Girls Girls Girls starts out with the words 'Put your number on this paper coz I would love to date ya.' which dates this tune because now it would all be all about putting your number in my phone Ariel Pink stylee. This tune's basically a California Girls for the post-millennium. Z's bragging about all the chicks he's got. They're from France, Peru, The Projects, Africa, Spain and China. He's got a model, a feral, an immature chick, a paranoid chick and a stewardess. They're all cooking for him, Bootlegging him, making sure he's got extra pillows on his first class seat and OMG one even asks for respect! He loves to holler at them when he comes on top. There you go he loves girls like it's the 1950s. Jigga That Nigga is a funky jam with a sitar sample. This tune's more of its time with its clipped beats and it wouldn't have been out of place on an LP by his future Mrs group Destiny's Child. Z's so old school he says 'with his yellow wrist watch and Gucci flip flops/Six Top Models who is this hot?' We all know the answer to that one. Z's got a fast car with 20 inch rims so 'ride with me/get high with me.' U Don't Know starts with a chipmunk vocal sample that continues throughout. The theme on this one is money and how much he's got. Jay Z is 'one black smart boy.' His entrepreneurial skills are so good he states 'I sell ice in the winter/Fire in hell/I sell water to a well.' His over confidence is insane here where he claims 'I...will...not...lose....Ever!' Hey I'm fully convinced. Gee coke's good (for the 10 seconds it lasts) for this kinda shit and he must have been getting some high grade gear.

Hola Hovita features an ultra funky beat. Timbaland's on this one and he kills it. 70s funk sample, an Afrobeat vibe and even a Reggae skank. I do recall Timbaland saying once he copped all his moves from Dancehall and Jamaica. I reckon this is the only track I've heard of his where that's blatantly obvious. Hola Hovita contains some of Jay's most incredible rapping. I could quote the whole fucking song its that good. The rhymes are so wicked. At one point he's rapping 'My dick game is vicious/Insane at bitches!' Then he's comparing himself to old blue eyes 'I'm The compadre/The Sinatra of my day.' I could go on but just one more 'I rhyme sicker than every rhyme spitter!' He's playing his A game here folks. Heart Of The City is an unmistakable (now...little did we know) K West production . Tremendous funky soul shit. This is another wholesale appropriation, this time it's Bobby Bland's Heart Of The City. That's a killer tune in it's own right. Haters get their comeuppance on this one. They're hatin The Hov he says 'Coz I got a little cheddar.' Z's asking "Where's the Love?' because he's just tryin to 'Get a couple of chicks/Get em to do an E/Hopefully they'll menage before I reach my garage.' Old habits die hard in the rap game ie. homophobia and sexism rear their heads in this song but it's so fucking good you just have to let it slide. The bit where it gets down to the break and Bland's acapella where Jay Z says 'Take em to Church.' is fucking so damn funky it's an inspirational highlight of the album. Never Change is more Kanye production and he even features on the chorus. This time Kanye uses Common Man by David Ruffin to excellent affect. The 'never change' sample fits perfectly as Jay is rappin about how he's still a criminal and he'll never change because crime pays. He's never gonna change 'From the womb to the tomb/From now until my doom.' I wonder if his Mrs is as accepting as Ruffin's was? Well she seems to have got past the fact that he's a knife wielding thug pretty easily. Song Cry is maybe a lament to his former lady because he'd been a bad boy but he can't cry, hey that would be unmanly, so he tries to make the song cry. He mentions divorce in the song but I don't think he was married previous to tying the knot with B Knowles so this tune could be from someone else's perspective or some kind of analogy. Another 70s soul tune is plundered here Sounds Like a love Song originally recorded by Bobby Glenn. All I Need features a Natalie Cole snippet sample and an incredible beat and that bassline is so fine...mmm. I find one of the things Z needs in the song really funny 'A Doo-Rag and a pocket full of loot/Got those.' he raps. A Doo-Rag was actually originally a gay prison thing in the 70s. The lady men inmates would wear this silky head wear simulating long hair to indicate their femininity. So one wonders whether Jay Z is aware of it's origins or if this irony is lost on him.

Renegade features Eminem on verses and production. It's a hell of a beat. This Eminem fella's pretty good isn't he? The beat is incredibly subtle with an amazing deep bassline. It's got a soundtracky vibe particularly that spooky theremin like sound and the rest is a bit like a miniature minimal symphony. At one point Eminem raps 'Maybe it's beautiful music I made for you to cherish.' He's on the money right there. Renegade starts out with Z dissin haters who say he's become too bling for the hood. He just retorts like the true capitalist believer that he is, that he's the way and the light and he's just showing the hood how to do things right. Then he's dissin journalists as bullshit who couldn't possibly understand his hood upbringing circumstances. Then, well, you forget about Jay Z as soon as Mr Mathers opens his pie hole. It's now his song. 'I'm debated, disputed, hated and viewed in America as a motherfucking addict/Like you didn't experiment?/That's when you start to stare at who's in the mirror.' What do they say "Don't work with Animals and Children?" Well my advice would be not to work with someone more notorious and hated than you in the rap game ie. Eminem is killing this. After another verse from Jay Z Eminem is playing Z at his own game. He's come from the gutter to become 'A modern day Shakespeare/Jesus Christ/The king of the Latter Day Saints.' Wow I bet that didn't get any eyebrow action. Then he says this great line 'Motherfuckers hate to like you!' That sums up incredibly well the conflicted feelings a lot of people would have about a character like Eminem.*

Bink is back on the beat for the final track Blueprint (Momma Loves Me). Al Green's 1973 Free At Last is the sample source here but it may have come via Mary J Blige's tune No One Else anyway it's one of the more modern beats on this record. It does have this great old school organ though. Anyway this is a really low key way to bring proceedings to a close. This is a melancholy tune where Z tells us the story of his upbringing with no dad in The Projects. I always have a chuckle, though, at the line 'Hootie babysitted/Changed my diapers.' I always think of Hootie and the Blowfish. Was it that dude changing your nappy Jay? I mean there can't be too many Hootie's around, can there? Bonus tracks who need em? Not me. I would never have have dreamt I could write something positive about this guy 17 years ago let alone give one of his albums near classic status.