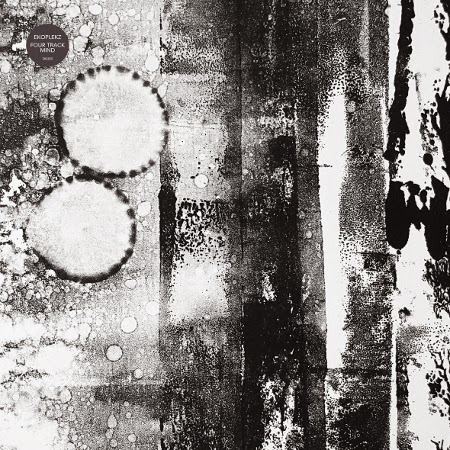 Nick Edwards aka Ekoplekz is busy as ever. I'm still getting my head around eMMplekz's You Might Also Like, his third collaboration with Baron Mordant, and here comes another Ekoplekz double LP. He's already released an excellent album this year Unfidelity. How he never lapses in quality is a testament to his musical vision and talent. This could be his most ambitious project to date. In the past it was like his music machines were out of control but now he seems to have reigned them in and gained astonishing results in the process. Four Track Mind is a dazzling album. There is undeniably something that sets this LP apart from previous Ekoplekz releases. I can't quite pinpoint what it is. Maybe it's the bass placement in the mix? This is Ekoplekz at his most sprawling and diverse. Four Track Mind is the sound of the continuing metamorphoses of Ekoplekz, heading further into the unknown. I reckon Edwards could have a second act where he becomes a soundtrack composer. The record cover is somewhat reminiscent of a Scorn album. Make of that what you will.

It all begins with Ariel Grey (funny eh?) that is like a kosmische tune gone awry. Initially ambient it gives way to a mechanical beat then its like Augustus Pablo shows up for a moment followed by what I think is a space ship crashing through some kind of meteor shower and perhaps off into oblivion. Tantrikz is a bit lighter with its motorik dub pulse which has me envisioning a lunar autobahn for moon buggies. This is some great stuff. Meek Street is a jaunty little electronic ditty, good times. Interstice has a cold lost future vibe. Then it's the glowing sci-fi of Reflekzive. Next we're in gloomy territory with Death Watch, which is cinematic in its darkness. This is all quite a trip.

D'vectiv is intergalactic melancholia that turns to brittle funk, ending in a squall of white noise. In Teak Effect is pastoral technoid dub. Edwards could do a remix of this and have a dance floor hit on his hands. The title track is an off kilter doomed dub composition complete with squelches, clanks and a bass that's doing its own thing (possibly another song entirely). Return To The Annex is all seething swirly electronics and distant haunting voices (some kind of family tape from 1977). It's hypnotising. This is an outstanding track on an outstanding album. Four Track Mind closes with the lovely dubbed out melodic electric circuits of Fox Eyes. Fox Eyes is heading in the direction of idylltronica zones and that's a very good thing here.

Maybe I was a little hasty when I proclaimed Unfidelity as the album of the year back in March as Four Track Mind is even better!