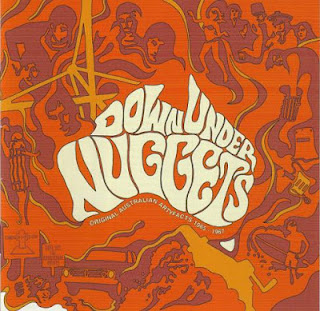 Speaking of Ugly Things compilations put out by Raven Records in recent posts, I just realised this has been released by Festival Records. I e-mailed Raven several years ago to ask if they'll ever be re-releasing any of the Ugly Things volumes, as I had one missing,  and they said probably not ever. I thought oh well. Then later I thought its been so long since they were put out a whole generation or two have missed out. I also thought with the Internet this stuff would only be gaining in popularity. Then there was a resurgence of garage rock (mainstream crossover) in the early 21st century, so the market would be quite large for a reissue. So in the end I thought they were being stupid. In 2010 Ian D Marks and Iain McIntyre then published the fabulous book Wild About You: The 60s Beat Explosion in Australia & New Zealand. So not just the people in the know but a whole younger crowd were presented with all this (a lot of it quite enlightening) info on a bunch of the 60s bands. Some of which were quite obscure and some who were massive pop stars.


If you've read my blog before you will know of my admiration for such groops as Peter & The Silhouettes, The Sunsets, Black Diamonds, The Elois, The Tol-Puddle Martyrs, The Masters Apprentices, The Loved Ones, The D-Coys, Sunday, The Atlantics, The Wild Colonials, The Missing Links, The Throb, The Templars and so on. So those of you new to the game this will be a great intro to the cool, snarly, fuzzy, hormone fuelled and sometimes frightening sounds of the Australian R&B and Beat Soundz. Me well I really don't think I need to buy it. I'm pretty sure I could make this comp as a mixtape tonight. I guess Volume 1 of Ugly Things for me is the comp! Don't get me wrong this Downunder Nuggets is a bloody great compilation. I highly recommend to the kids and the uninitiated. By that I mean everyone on the planet not into this golden era of Australian pop culture yet.


But there are other bewdies too. It's A Kave In: Kingsize Kollection-Wild Oz 60s Punk From The Caverns Of Time and Devil's Children: Hellacious Sixties Punk Rarities are two other classics. Let us not forget The Hot Generation and Of Hopes & Dreams & Tombstones released by Big Beat, which I think is a British label, and maybe still in print. It's all great music! Get into it. Get your shindig started. Push your coffee table back. Put on your dancing shoes on. Time to kut the rug.

Many Mary
Sunday
From It's A Kave In.


Come On Baby
The Templars
Melbourne band of youngsters from 1965.
Half sung in Greek & half in English.
I can picture them in 1960s Richmond,
Melbourne has a massive Greek population.
This is great wild stuff!


Krome Plated Yabby
The Wild Cherries
Lobby Loyde on guitar. This one's a bit more psych
than the others. It's like there's a pop song trying to
escape the weirdness but doesn't quite get out.
What a mental psych classic!