Johnny Frog Scorched Earth Policy﻿
How good? The video too!

I only discovered this band about 4 years ago.  I don't know how I missed them. I'm a bit vague sometimes, I would have heard them on the various NZ music radio shows I was listening to in Melbourne in the early 90s. I knew the Victor Dimisich Band and the Terminals.  Scorched Earth Policy was kind of in the middle of these two bands existences and contained members from both aforementioned groups.  Anyway what a fuckn' delight it was to hear this record Keep Away From The Wires.  It became an instant fave and remains so to this day.  They were from Christchurch and did a couple of EPs for Flying Nun in 84/85. They were all but forgotten until in '91 Xpressway put out Foaming Out, an archival tape containing studio cuts along with documentation of some live performances. I love their kinda spooky/creepy/malevolent cultish vibe(is that just me?), their unbridled enthusiasm and the girl/boy vocals. Good guitaring too. 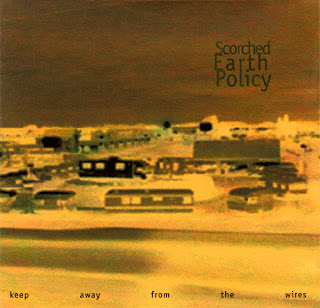 Keep Away From The Wires - Scorched Earth Policy (Medication)
﻿This is an update of the Foaming Out tape with extra tracks. Released in 2000. All you need. Track it down.

**The Youtubes didn't have all the tracks I wanted, anyway......

Email ThisBlogThis!Share to TwitterShare to FacebookShare to Pinterest
Labels: Flying Nun, Keep away From The Wires, Scorched Earth Policy, The Terminals, The Victor Dimisich Band, Xpressway