SPACE DEBRIS GOES TO THE ORIGINS OF THE DISCO BASS
The Jackson 5 - Forever Came Today (1975)
I love how avant-gardists & no wave type rockers seem to think they had a monopoly on bizarre, unorthodox & mutated forms of popular music. This track right here here is more subversive than a thousand records made by artists of those aforementioned sub-genres. This is the real deal where the mat is pulled from beneath pop music's feet. Forever Came Today is an astounding piece of experimentation that is innovative, strange and yet still compelling pop music. This bass-line is something else. It feels like it came from another planet! The song structure is really luxuriant, rapturous and free. The term mutant-disco has always annoyed me as it was a fallacy. Disco & Dub were ahead of that game as they had already deviated from normality all within the confines of their genre. They had already severed, sliced and reconstructed their genres to make the music even more pleasurable than previously imagined. Disco had deformed before any such notions of conforming to deform. This tune still sounds fresh today!
Posted by Tim 'Space Debris' at 21:49 No comments:

This was on in the background until the deep soul engulfed me at 3.07 then he continued to take it to fucking church for the rest of the song! Oh my I've had to replay it another seven times! This is performed over 10 years after Brook Benton topped the charts with with this gorgeous Tony Joe White tune and he is in fine form! This version kills his original. He is a showman and he's feelin it and the Lord's feelin it and he's feelin God back and it's smile-time! Halle-fuckin-luh!

SPACE DEBRIS GOES TO THE GOSPEL DISCO
Gloria Griffin - YOU (1978)
This is soo good! So infectious. So DISCO JESUS! It makes me wanna go to church in the 70s! The rhythm is craazy awesome. The break at l.50 is classic then the bass kicks in, noice! I first heard this on the Cultures Of Soul Records comp Greg Belson's Divine Disco: American Gospel Disco (1974 To 1984) that came out in 2016. Get Down or Get on Up ah! On the Jesus juice!
"There have been lots of people
No one like you!" 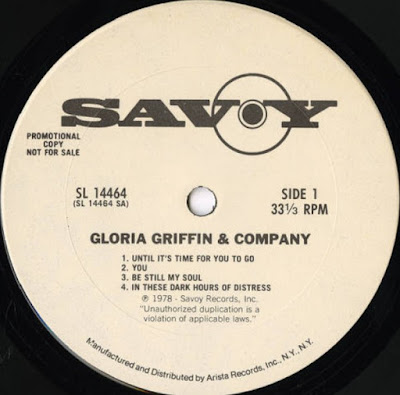