It's funny how songs like this appeal to you as a child. I guess it was like a portal into what adulthood intensity was going to be like. Little did we know how painful such things were going to be and that we never really wanted to go through a scenario such as the one outlined in this song. Great songwriting but if you look a little closer this is actually quite a disturbing tune. In there somewhere seems to be a suicide threat.


I loved this when I would have been 10. Quite possibly the greatest heartbreaking tune of them all. It's all too much! That voice too.
Posted by Tim 'Space Debris' at 15:17 2 comments:

I loved this when it came out. I would have only been like 8 but it got played to death on the regional radio station of my childhood 3MA when I lived in Buronga. Of course I wouldn't have realised the Stevie Nicks connection. Maybe I thought it was Fleetwood Mac though, I mean it's co-produced by Lindsay Buckingham. I think I actually only learnt that a year or two back!


This was on a hits compilation (Chartbusters?) when I was like 10. I wouldn't have realised who he was until at least 5 years later. I remember my sister thinking he was a bit of alright. I dunno though, he's stacked on a few pounds and isn't as cool as he was during the Rumours/Tusk era or even circa The Dance. Is this a good tune? I have no idea. I can't get it out of my head though.
Posted by Tim 'Space Debris' at 12:13 5 comments:

In Love With These Times: My Life With Flying Nun Records 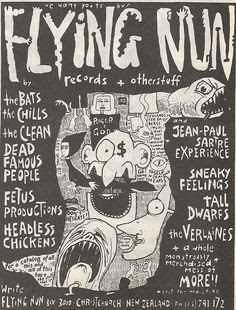 Finally a book on Flying Nun written by the guy who started the label. Haven't read it yet. Here's a podcast from the other day with the author and a bunch of old film clips. Can't help but think this might be quite boring though, like that podcast. How sycophantic is that interviewer as well? Bruce Russell once hinted that Flying Nun's signings weren't necessarily based on aesthetics or great judgement but just whatever bands existed on the south island and other parts of NZ at the time. They were lucky there were so many good ones. This was further demonstrated in the late 80s when, after Flying Nun did some major label deal, a lot of the better acts started getting their work rejected. Anyway I hope it's good or do I?.........I wonder if the Axemen will get a mention?

I kind of liked it when you knew very little about underground music from NZ or Flying Nun. In the 80s I reckon there were only like 5 videos that ever got played on Rage. You'd see a small news article on The Clean or Verlaines in RAM back then plus the occasional review or bit on The Clean or The Chills in NME and Melody Maker. In Clinton Walker's 1983 (published in 84) book The Next Thing, which was about the current state of Australian rock, there was one paragraph at the end of the book mentioning The Clean, Victor Dimisich Band, The Chills and The Gordons. Walker speculated that perhaps there was something cool going on over there in the land of the long white cloud. He wasn't even sure if The Clean were still together! That's how little information there was at the time. Finding a Flying Nun record was like discovering treasure. Now all that fabulous mystique has gone and we're way too over informed more and more each day. I miss the mystery. I don't wanna know how much a Bats LP cost or how many copies they manufactured. It was all about these peculiarly beautiful tunes that seemed to come out of nowhere or maybe from a parallel time and universe. New Zealand seemed so mysterious and so far away then, even though it's just a short flight from East Coast Australia. 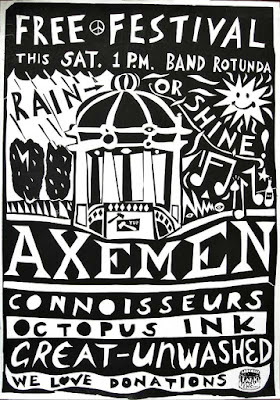 
A side
Released on Rough Trade.
Posted by Tim 'Space Debris' at 10:27 No comments: