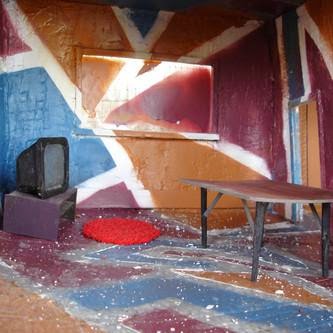 Baron Mordant and Nick Edwards are back with the third instalment of their eMMplekz project. More barely comprehensible sardonic jumbled ranting over synth squirts, squelches, drones, echoes, clangs and ominous scrapes. Martina Navratilova gets mentioned, good to see a bit of tennis in music. There have been songs about cricketers before and The Wedding Present had an album in the 80s named after the English soccer and drinking champion George Best. I can't think of any other references to tennis in music though. There's a wealth of possible subject matter in the tennis world I reckon ie. Vitas Gerulatus, Bjorn Borg's headband and the history of Andre Agassi's hair.

Terry Wogan, Ronnie Corbet, George Peppard and Jeremy Irons also get mentioned in the opening track Name Blotter along with many others. I'm not sure but it might be about a cigar factory or telly studio, but really I have no idea. Re Re is worth it just for the line 'The Elbow tribute band tonight is called Elbow. Please welcome Elbow.' Toward the end of Stag Don't Nick Edwards takes over and we end up in brittle almost-funk territory...I like a lot. The following tune MaMa has an almost-motorik pulse amongst the dark synth blotches. Rolf Harris gets name dropped in a tune about Mordant's mum running in the park, crematoriums and human smoke, you know the usual subject matter for a pop song. The Synths on Anglorum Saxonum are almost lovely in a kosmiche sort of way. Baron's on about newsagents being held up, mephisto, inklings, status updates, something about actors and Swiss lakes... I don't bloody know. Bedrheum Raver 78 is all about real estate, Portsmouth, holidays, plates that keep spinning, e-mails from Oneotrix Point Never, dog turds, #tags, record shops, cheese rolls but then you are stopped in your tracks as the word deluge clears for a moment. Mordant states he got a bit sick and tired of himself last year and needs to change, and by the sounds, is also fed up with music industry bullshit. Then I think he says 'There's a little life.' and proceeds to list shopping coupon deals. This lo-fi electronic dub ditty closes with the line 'X-Factor watch out!' It's his most personal lyric to date making him sound normal, for a brief moment, thus making it the most bizarre eMMplekz tune ever, well word wise anyway. It's not like they recorded it in Laurel Canyon on Nick's acoustic guitar. Don't worry the final track Gangle Tronslate is one of the most incomprehensible they've ever put to tape. Baron Mordant must use the Gyson/Burroughs cut up technique otherwise he has one hell of a scrambled brain. This one mentions Toyotas, hand jobs, twitter, Christians, Larry David, McDonalds and so on. The backing is one of Nick's most relentlessly intense beats/throbs. You might also Like is another eMMplekz gem to add to the collection.